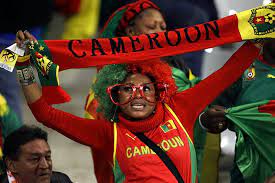 Cameroon became the first team to qualify for the last 16 of the 2021 Africa Cup of Nations after the hosts thumped Ethiopia 4-1 in Group A on Thursday, January 13th, 2022.

Captain Vincent Aboubakar and Karl Toko Ekambi scored twice each for Cameroon to advance with six points after also winning their opening game against Burkina Faso.

The Indomitable Lions have also qualified for the knockout stages, with the win guaranteeing them to be at least one of the best four third-placed sides, but they can finish as group winners if they avoid defeat against Cape Verde on Monday.

Ethiopia made a shock start as they caught Cameroon’s defence napping, with Amanuel Aregawi delivering a square ball into the area and Dawa Dukele getting in front of his marker to slot home the pass.

It was the second time already Cameroon have trailed in the tournament, but they needed only four minutes to equalise.