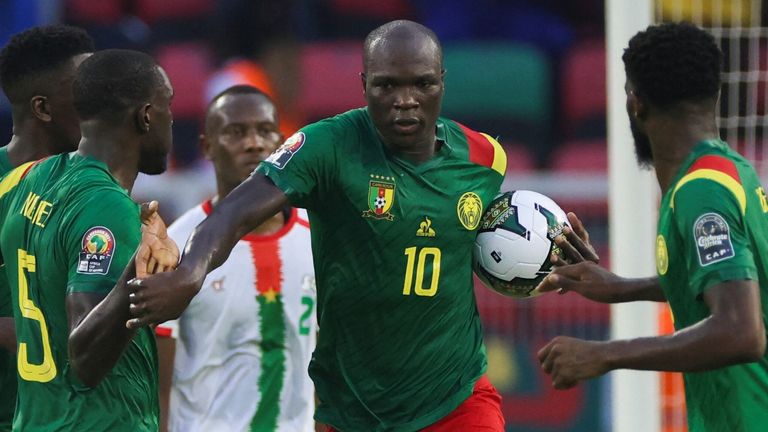 Hosts Cameroon came from behind with two penalties in the space of eight minutes at the end of the first half to beat Burkina Faso 2-1 in the opening game of the Africa Cup of Nations at Olembe Stadium on Sunday, January 9th, 2022

Captain Vincent Aboubakar scored both penalties, calmly slotting the first to the right side of the goal and the second to the left to complete a comeback that left home fans sighing with relief.

Burkina Faso took the lead following their first sustained period of pressure after Bertrand Traore saw his header from a corner cleared off the line by Nouhou Tolo and Sangare clipped the crossbar with a cross.

Aston Villa forward Traore picked up the loose ball on the right wing and crossed to the back post for Sangare, who showed brilliant technique to send a first-time volley inside the left-hand upright.

But the visitors lost the lead with two reckless pieces of defending at the end of the first half.

Traore barged into Andre-Frank Zambo Anguissa to give Cameroon their first penalty, which was only confirmed after referee Mustapha Ghorbal of Algeria consulted VAR.

The Africa Cup of Nations officially started with a short opening ceremony a few hours earlier at Olembe Stadium. The continent’s football showpiece will be played under the shadow of the coronavirus pandemic and amid a global surge in cases.

FIFA president Gianni Infantino attended the opening ceremony, as did 88-year-old Cameroon president Paul Biya, who has led the Central African country since 1982.

Cameroon face Ethiopia at the Olembe Stadium on Thursday at 7pm.

In the other Group A fixture, Burkina Faso take on Cape Verde at 10pm, live on K24 and StarTimes