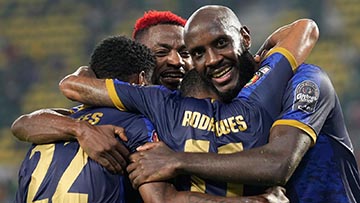 Cape Verde national footbal team The Blue Sharks pipped Ethiopia 1-0 to earn their first victory at the Africa Cup of Nations (AFCON) since 2013.

Julio Tavares’s 45th-minute goal was all Cape Verde needed to see off the East Africans in a Group A match at the continental showpiece, which began on Sunday, January 9th, 2022 in Cameroon.

The match at the Stade de Olembe saw the Ethiopians hold on defensively even after losing Yared Bayeh, who was shown a red card in the 12th minute of play.

Cape Verde are now second in the group, with hosts Cameroon sitting in first position, having earlier won their game 2-1 against Burkina Faso.

Burkina Faso are third in the group while Ethiopia rest in bottom place.

On Thursday, all four teams will return to action, with group leaders Cameroon taking on Ethiopia and Burkina Faso facing Cape Verde at the same venue hours later.