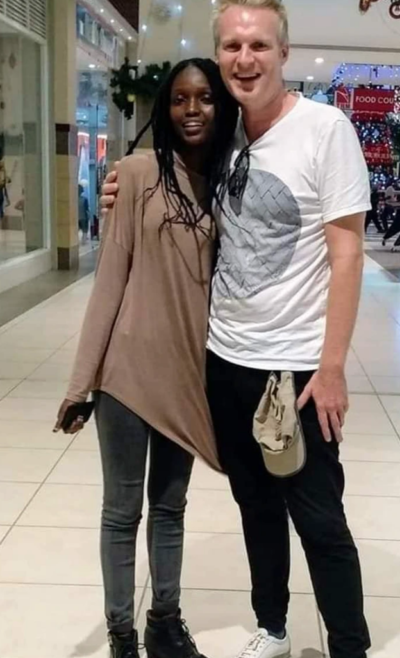 Felesta Nyamathira Njoroge with her Belgian boyfriend De Mesel Marc have been taking waves on the internet for some days now.

Felesta a 21-year old collage student at Nairobi Technical Training Institute with millions of cash has suffered a huge blow after the court ordered the freezing of her bank account.

Justice Esther Maina ordered the account to be frozen for 90 days in order to allow the Asset Recovery Agency (ARA) to establish the source of the Ksh102,654,024 in Felesta Nyamathira’s Co-operative bank account.

“An order is hereby issued prohibiting the respondent, her employees, agents, servants or any other persons acting on their behalf from transacting, withdrawing, transferring, and, or dealing in any manner in respect of any profits or benefits derived or accrued from the funds,” Judge Esther ruled.

ARA went to court seeking the account to be frozen until investigations to determine the source of the cash are established.

The agency believes that the funds were transferred unlawfully and for unknown reasons.

According to ARA, the respondent had the money suspected to be proceeds of crime and money laundering.

“Unless this honourable court grants the orders sought, the respondent will continue to enjoy the benefits derived from proceeds of crime,” part of court documents by ARA read.

The money was allegedly deposited in the account by Felesta’s boyfriend, Marc De Messel, who is a bitcoin billionaire from Belgium.

De Messel is said to have started trading in the virtual currency in 2008.

He has recorded a statement indicating that he sent the money to Felesta noting that he followed all the procedures required including filling paper work with the bank.

“As investors with every exchange and every bank, you need to do this constantly and there is a trace on where the money is coming from. It’s from my investments and my brokerage,” Messel stated.

“I knew there were more unlawful activities in Africa than Europe but without any notice, summon or question by police, suddenly being apprehended in my home, seizing my laptop, phone and passport, taken away handcuffed, as well as my pregnant girlfriend, I did not expect,” he added.

Felesta had received the money in four different transactions between 4th August and 6th August 2021 in her cooperative bank account which she is the sole signatory and beneficial owner.

The account is said to have been opened two days before the huge deposits were made.

She says that it was a gift from her Belgian boyfriend Marc. ARA summoned her on 18th October to explain the suspicious transactions but she did not turn up instead she sent lawyers.

Her account will now be frozen as more investigations are done.