Simba Arati rubbishes talk that he is shifting base to Kisii as he distributes food, blankets and cash to Gatina fire victims 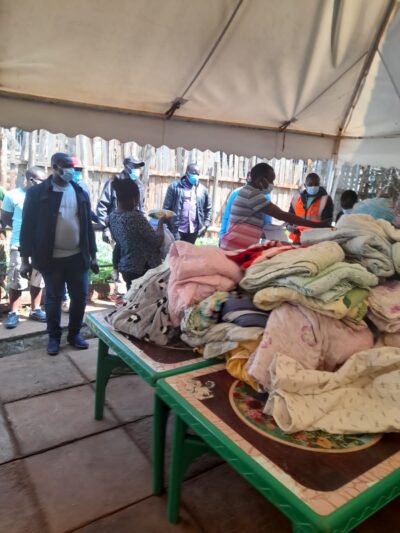 Dagoretti North Mp Paul Simba Arati today has made it clear that he is the area Mp and still serving the good people of Dagoretti north.

“First I want to empathise with you my brothers and sisters following the fire tragedy that has rendered you homeless. My thoughts are with you and will keep on standing with you as you rebuild your lives. Today I have called on you so that together with your MCA Hon Ayoi we can say pole” Simba said.

Hon Arati used the occassion to preach against politics of hate, class and negative ethnicity.

“My brothers and sisters I want to urge you all to remain united as people of this great nation. Let us shun tribalism and politics of hate. We are all suffering as a result of the fire inferno that burnt down our houses. The fire never asked you whether you are luo,luhya or Kikuyu. We have all suffered the same fate. Therefore let us remain united as a people” continued Arati.

Iam bulding my party ODM across the nation in readiness for a Raila presidency.

Hon Simba Arati also weighed in on the talk that he has shifted his political base to Kisii.

“Those going around telling you that I have shifted to Kisii are misleading you. Iam the Spokesperson of the Abagusii people and as a spokesman I have to traverse the two Abagusii counties talking to my people. Iam also playing my role as an ODM member in making my party popular. I have since helped open ODM offices in Kisii and will also open more here in Nairobi” added Simba.

“Raila has been winning elections but this time round, thanks to the handshake between Raila and Uhuru, Baba is going to be the 5th president of Kenya.”

While dismissing Ruto’s presidency, Arati said that 2022 is Raila’s time and all Kenyans should rally behind him.

“Ruto should wait, but before he dreams leading this nation, he should change his bad habits which we all know”  said Simba amid chants of mwizi! mwizi!

Simba who is in his early fourties also said that his political future is still bright and therefore after Raila has done his 5years, Ruto will have to contend with him.

“I have also worked hard to be where Iam, most of you know that I sold vegetables here in Dagoretti North so Ruto should stop seeking sympathy selling his hustler narrative. Once Baba has done his 5years, we shall be there to take over so Ruto should brace himself for a battle royale. This country belongs to all of us” concluded Simba.

Yesterday ANC leader Musalia Mudavadi also visited the fire victims and donated food to them while calling upon them to consider voting him in 2022.