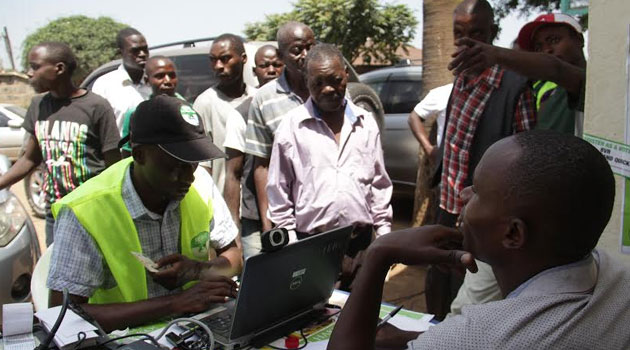 The Independent Electoral and Boundaries Commission (IEBC) is targeting to register at least six million new voters in October, when the agency rolls out a nationwide continuous voter registration process.

The IEBC Chairman Wafula Chebukati on Friday, September 10, 2021 said the continuous voter registration exercise will be conducted at the County Assembly Ward level.

“I urge all eligible Kenyans who have not registered as voters to turn up in large numbers and register,” he said.
Chebukati made the remarks as he unveiled the four new members of the commission who were sworn into office by Chief Justice Martha Koome to replace four commissioners who quit after the 2017 General Election.

The entry of Commissioners Juliana Cherera, Francis Wanderi, Irene Masit and Justus Nyang’aya completes the agency that has been operating with three commissioners for almost two years.

The Commissioners have already been inducted and taken through various programmes including corporate governance and Commission operations.

They join Chebukati and Commissioners Abdi Guliye and Boya Mulu.

The vacancies in the Commission were occasioned by the resignation of Commissioners Consolata Maina (Vice Chairperson), Paul Kurgat, Margret Mwachanya and Roselyne Akombe.

To ensure the registration exercise is conducted smoothly, Chebukati appealed for adequate and timely funding of the commission.

The National Treasury had already allocated the electoral body Sh26.3 billion for the election set for August 9, 2021 but the commission insisted on additional funds.