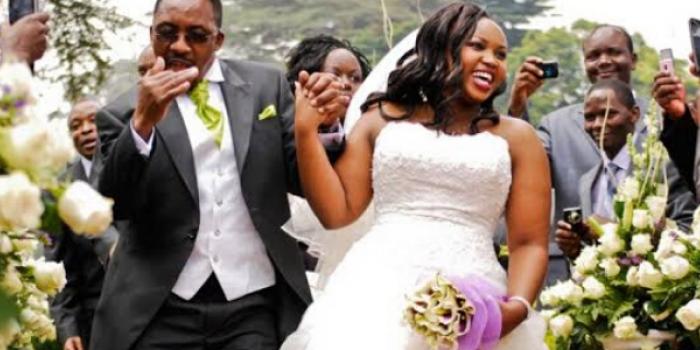 Neno evangelism founder, Pastor James Ng’ang’a   who has been in the media for the wrong reasons is now in the press again but with news of blessings after being blessed with a bouncy baby girl days.

Pastor James Ng’ang’a’s wife Mercy Murugi gave birth to the baby when the preacher was out of the country pursuing personal issues days after being confronted by the Media Council of Kenya (MCK) over his preachings which were being aired on Sasa TV were considered to be laced with obscenities.

According to sources, Ng’ang’a and his wife were blessed with a child who was named Destiny Maina.

The pastor married university student Murugi a daughter to one of his congrgants in a lavish wedding in 2019.

Kenyans who sent their congratulatory messages to the family of the pastor have urged him to start preaching in the right manner after being called out to be misleading Kenyans through controversial preachings.

The controversial pastor went viral after one of his sermons caught the attention of Kenyans. In the sermon he said that he had slept with several women from Ukambani.

He claimed that he has over 70 children all over the country and most of them are from Ukambani.

Later the Media Council of Kenya (MCK) has threatened to take action against Sasa TV, a station owned by him and his church.

The council says that the channel has been broadcasting obscenities, and should show cause on why action should not be taken against it.

The complaint is against Pastor Ng’ang’a himself, whom MCK claims said unprintable words on his air in a recent broadcast.

“The Council notes that the media house in question breached clauses 5 (b) (c) on accountability and 10 (1) on obscenity, taste and tone in reporting by allowing a presenter, apostle James Ng’ang’a in a live broadcast from ‘Jerusalem City Kenya’ at 10:24 hours where he uttered offensive and unprintable words on air,” chief executive officer David Omwoyo said.

“We have subsequently directed the media outlet to show cause why action should not be taken against it, further to which the council will institute sanctions in line with our mandate.”

The offensive broadcast cited happened on October 9th, 2021. The Pastor detailed how his dead body should not be handled, and even made references to the size of his genitalia.

Ng’ang’a reacted by saying that he is a man of God and only speaks the truth.