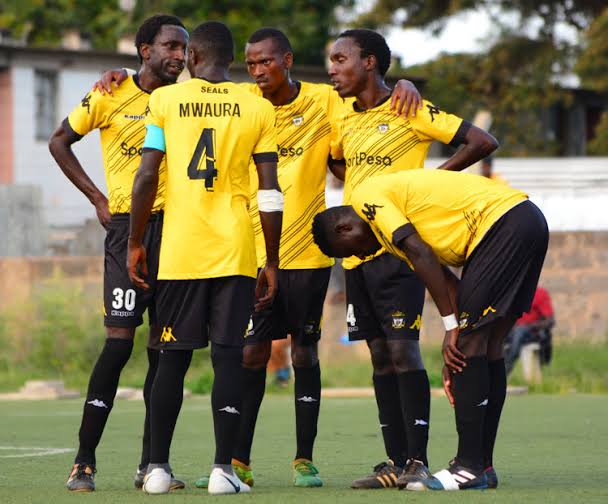 SS Assad from Kwale county were given a humbling welcome to the BETIKA national super league. The coastal based side suffered a 4-1 defeat in the hands of their hosts, Murang’a Seals at the St Sebastian park.

Being the first round of the 2021/22 national super league season, this was SS Assad’s first ever action in the second tier league. As debutants at this stage, the Ali Marumu tutored side were hoping for a perfect start to their maiden campaign at this level, having graced the div 1 league the past couple of seasons.

The hosts, being the more experienced of the sides had the better start in the match pressing high with a clear intention of an early goal. And as early as the third minute Kiplagat John was unlucky not to have found the back of the net after his fierce drive from inside the area somehow cannoned off the wood work of a well beaten Ali Kesi in Assad goal. Fullback Ronny Katumanga had made a tantalizing run on the right before squaring the ball to an unmarked Kiplagat in the 18yard box.

Against the run of play, the visitors got the first goal of the match in the seventeenth minute after Shaban Mwachozi pounced on a rebound after MSeal goalie, Wilson Mwangi had spilled a shot, to give the coastal side the lead.

Irked and seemingly rattled, Murang’a Seals immediately got the equalizer from the restart through Levian Omondi after being set up at the edge of the box by the pacy Wilson Kamau.

Eight minutes later, the former Nairobi Stima winger would grab his brace capping off a brilliant debut performance infront of the home crowd.

First half would end 2-1 in favor of the hosts. Come the second half, and SS Assad were the better side camping in their opponents half in the opening stages of the half but they couldn’t get a second goal.

They would soon be undone by Mseal’s third goal, coming from another debutant, one John Mwita. The former Modern coast midfielder was given too much room and space to dribble into, which he obligly did before unleashing a law drive towards SS Assad goal, beating a diving Kesi at the bottom corner to make it 3-1 to the home side.

With a healthy lead, a comfortable two goal cushion, Seals resulted to keeping the ball and displaying some beautiful football, entertaining the home crowd who had turned up in a good number to cheer them on as they got their campaign off to a perfect start.

And as if to rub salt into Assad’s wound, Munyovi Dennis would get his name in the score sheet in the 86th minute after dancing past his marker in the box before finding the top corner of Ali’s goal, to make it 4-1.

The match would eventually end 4-1 in favor of the home team, a perfect start for coach Nyaberi in his quest to earn promotion into the fkf premier league, on the other hand it was a baptism of fire, a firm reallity checker for the league debutants who were welcomed in style to the league of the bigger boys.