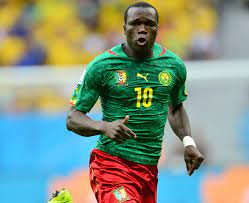 Aboubakar equaled Eto’o’s record of five goals after scoring in Cameroon’s 1-1 draw against Cape Verde in their final group A match at Olembe Stadium in Yaounde on Monday, January 17th, 2022.

His goal came after Moumi Ngamaleu’s free-kick was headed away by Cape Verde’s Diney Borges, with Aboubakar unerringly finding the bottom corner with a firm left-footed strike as he latched onto the loose ball.

The top scorer in Nations Cup history with 18 goals, Eto’o scored five goals in both the 2006 and 2008 tournaments – a record that is looking in danger with four matches possibly left for the five-time champions to play.

The Indomitable Lions took the lead when captain Vincent Aboubakar drilled home his fifth goal of the tournament after 39 minutes.

Unbeaten in their capital since 1988, the result means Cameroon will remain in stronghold Yaounde for their last-16 tie against a third-placed side from Group C, D or E on Monday, 24 January.

Cape Verde finished third in the group on four points, behind Burkina Faso in the table on head-to-head record, and the Blue Sharks face a wait to see if they will progress as one of four best third-placed sides.

At the last Nations Cup, four points was good enough to reach the last 16, just as it was for teams at both the 2016 and 2020 European Championships.