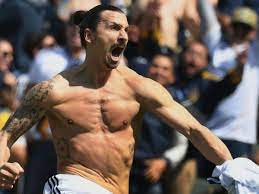 The former Manchester United, Barcelona, Inter Milan and Juventus striker had been out since May because of a knee injury but has now scored in 24 different league seasons, dating back to the 1998-99 Swedish league.

“Ibrahimovic never gets old and he has great passion, a fire burning inside him,” said Milan coach Stefano Pioli.

The Swede, 39, returning from a four months lay-off due to an injury tapped in Milan’s second goal after Portugal’s national youth team forward Rafael Leao’s opener.

Ibrahimovic was introduced in place of Leao on the hour mark, meaning Rebic moved to the left flank and from there he brilliantly set up a tap-in for the substitute in the 68th minute.

The Swedish legend also showed he has lost none of his ability to get under the skin of opponents when, in the last minute of the match, his forceful rubbing of Brazlian international Lucas Leiva’s head led to Maurizio Sarri running onto the pitch to remonstrate with him – and earned the Lazio coach a red card.

Milan, who like Lazio came into the game with an 100% record, go top of the table, above Napoli on goal difference.