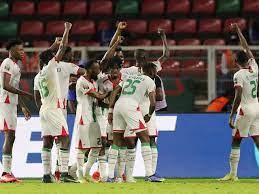 Burkina Faso secured a place in the knockout stages at the Africa Cup of Nations after a 1-1 draw with Ethiopia and second place in Group A at the Kouekong Stadium in Bafoussam.

Cyrille Bayala netted midway through the opening period but his goal was cancelled out by an 82nd-minute penalty by Ethiopia striker Getaneh Kebede which earned his side their only point of the tournament.

Burkina will face the runners-up in Group C in the next stage, which will be either Morocco, Gabon or Ghana, though most likely one of the latter two.

The latter now face an anxious wait to see if they are one of the four best third-placed sides to advance.