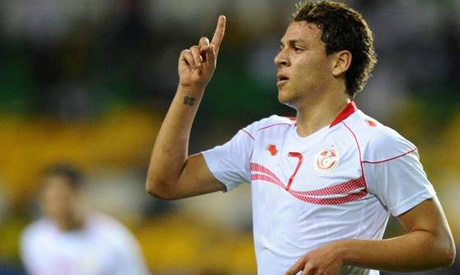 Tunisia upset three times champions Nigeria on Monday, January 23rd, 2022 to set up a quarter-final tie against Burkina Faso at the Africa Cup of Nations.

Msakni on loan to Al Arabi caught out Okoye, who has signed for Watford but is on loan at Sparta Rotterdam, with a low effort from almost 30 yards to break the deadlock soon after the restart.

The shot went past two Nigeria defenders before swerving and bouncing in front of Okoye, who got his outstretched left hand to the ball but could not keep the strike out.

Nigeria were reduced to 10 men after Alex Iwobi was sent on as a 59th-minute substitute but was dismissed just seven minutes later after catching Msakni on the top of the ankle with his studs – even though the Everton midfielder had appeared incredulous when initially shown yellow.

The West Africans were the only side to win all three group games in Cameroon, but were largely subdued against a Tunisia side hit by Covid-19.

Tunisia, Nations Cup winners in 2004, will face Burkina Faso in the last eight on Saturday, 29

Eguavoen is set to be replaced by Jose Peseiro as Super Eagles coach and the Portuguese’s first task will be to navigate a two-legged World Cup 2022 play-off against fierce West African rivals Ghana.