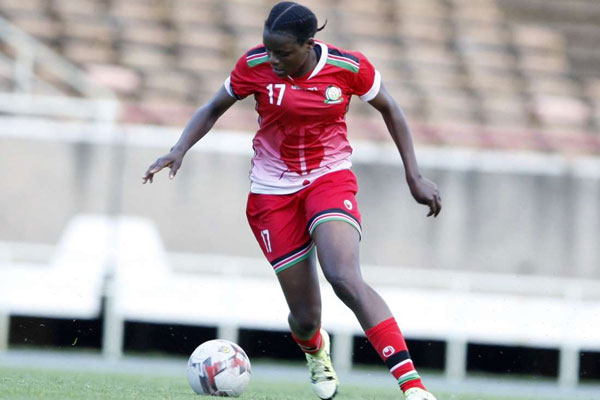 Harambee Starlets captain Corazone Aquino has assured Kenyans a big win against the Bright Stars of South Sudan in the first leg of their 2022 Africa Women Cup of Nations (AWCON) Qualifiers at Nyayo National Stadium in Nairobi on Wednesday 20, October 2021.

The experienced midfielder says they are not under any pressure to perform against the South Sudanese.

“We’ve been having good preparations. The coaches have done their part. It’s now for us to deliver. We are going to implement the skills we’ve learnt on the pitch during the encounter, ” she said.

The Bright Stars has been on the rise after taking part in the just concluded COSAFA Championship.

Thika Queens FC striker Mwanahalima Adam who said the morale in the Starlets camp is very high ahead of the encounter.
Starlets coach Charles Okere said the good number of days they were in the residential camp gave him enough time to implement his skills on his charges.

“I have a very lean squad. We are tuned for the match. We are now ready to counter our opponents. I believe the squad I will field in the game will be upto the task,” said Okere.

The return leg of the AWCON first round qualifiers will be held at the same venue on Sunday.
Starlets will be looking to qualify for AWCON for the second time after taking part in the 2016 edition that was was played in Cameroon where they were eliminated in the preliminary rounds.