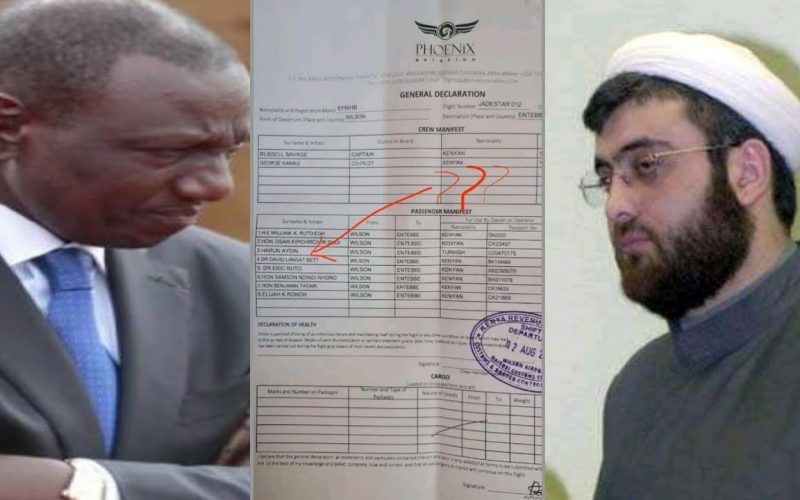 Turkish businessman Harun Aydin-who has links to Deputy President William Ruto- was detained by the police shortly after arriving at the Wilson Airport on Saturday, August 7, 2021from a recent trip to Uganda.

His Lawyer Ahmednasir Abdullahi took to Twitter on Saturday, claiming that he had been denied access to his client who is currently detained by the Kenya Anti-Terrorism Police Unit (ATPU)

“Apparently, the right to counsel doesn’t apply to Turkish national Mr Harun Aydin arrested by the Kenyan police,” the lawyer said “ I have been denied access to see him allegedly on ‘orders from above’.”

No information about the 55-year-old’s detention was released to the public, although the Turk was at the heart of Deputy President William Ruto’s recent Ugandan trip drama.

He was among five others who were to accompany the DP to Uganda on a private visit to President Yoweri Museveni.

The Turk has been in the country since 2018 and has interests in trade and consulting.

No one knows what role he was playing in  Ruto’s trip to Uganda, but what is known is that he accompanied DP Ruto allies to the Ugandan trip after the DP was forced to cancel the itinerary.

DP Ruto defended Mr Aydin in an interview with Inooro TV on Tuesday, hailing him as a savvy businessman.

“Don’t listen to those saying he is a terrorist. He is a businessman who has invested heavily in our country. The Turkish embassy confirmed he is genuine and has no criminal record,” he said.

On July 30th,  2021,  the government prevented Deputy President William Ruto and his allies from leaving the country to the neighbouring Uganda.

The presence of Harun Aydin, according to the Daily Nation, may have cost deputy president William Ruto his Uganda trip.

According to the New York Times, Harun Aydin, 29, was a key member of a terrorist group based in Cologne commanded by Muhammed Metin Kaplan, dubbed “the Caliph of Cologne,” who aimed to unite the Islamic world under a single caliphate based in a liberated Istanbul.

Mr. Aydin was detained on suspicion of “planning major acts of violence as a member of a terrorist organization with an Islamic fundamentalist background,” according to the prosecutor.

He was held by a Frankfurt court for “giving directions for major crimes such as murder and manslaughter.”

Prosecutors said Mr. Aydin’s luggage also contained a CD-ROM containing a training movie for Islamic holy warriors. Investigators reportedly discovered a suicide note to his wife and the last testament in his suitcase, according to the Kölner Stadt-Anzeiger.

The New York Times further added that Mr. Harun Aydin’s lawyer, Michael Murat Sertsoz, said his client was flying to Tehran for a book fair and had agreed to take a suitcase for another Turkish passenger with excess luggage.

Harun Aydin was set to board an Iran Air aircraft to Tehran with luggage including camouflage gear, a chemical weapons protective suit, a ski mask, and ingredients to make an explosive detonator, according to the German federal prosecutor.

Mr. Kaplan’s group of 1,300 people, most of them Turkish, is known as the Federation of Islamic Associations and Communities.

However, Hon. Oscar Sudi said the Turkish National was a big investor in fruit farming and had no interest in terror activities.

“If anyone is in doubt about the details of Mr. Harun then they can visit the Turkish embassy for more information. To the doubting Thomases, Ugandan President Yoweri Museveni is not a kid to deal with someone of questionable repute, you can use your diplomatic connection and inquire from Ssebo himself the kind of interest that the Businessman has in Uganda. Stop being stupid and minding other people’s business.”