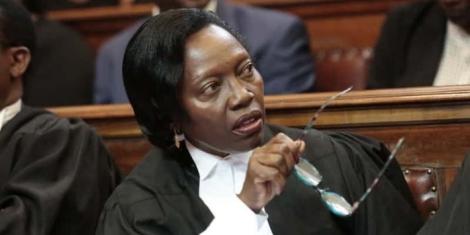 The High court has asked President Uhuru Kenyatta to appoint a Cabinet Secretary (CS) for the Ministry of Justice and Constitutional Affairs to implement six acts of parliament.

Alternatively, Justice James Makau has directed that a current CS should handle the docket but not the Attorney General as had been done by the president.

The Law Society of Kenya (LSK) had challenged the executive order where President Uhuru assigned executive authority to the AG arguing that it would have the effect of placing independent constitutional bodies under his (AG) direct control.

These acts that were put under the AG include The Law Reform Act, The Legal Education Act, The Kenya School of Law Act, The Judicial Service Act, The Kenya National Commissions on Human Rights Act and the Victims Protection Act.

Since the Jubilee led Government took over the reins of power in 2013 there has never been a Ministry of Justice and Constitutional Affairs.

In a judgement delivered on Thursday, December 2nd, 2021, Justice Makau said the president erred in not appointing a substantive CS to implement the acts.

Judge Makau ruled that LSK had demonstrated that the president of the Republic of Kenya has failed to uphold his duty under Article 132(3) to assign and designate cabinet secretaries according to legislative intent.

“I find that legislative intent is likely to be defeated as a result of failure by the president to create and designate cabinet secretaries provided in the said statutes,” he said.

The court further ruled that there is a clear distinction between the office a CS and that of the AG.

“I am satisfied that the AG is not a CS and failure by the president of Republic of Kenya in appointing and assigning a befitting CS for the lawful implementation and administration of the 6 acts is inconsistent with the constitution of Kenya, the rule of law and prejudices public interest,” he said.

Judge Makau also ruled that his court had jurisdiction to determine the matter ruling that the law is clear that the decisions of the president of the republic of Kenya are subject to judicial review.

“The high court has jurisdiction to issue interpretative declarations including consequential enforcement to ensure compliance with the constitution,” he said.

Judge Makau said he issued the reliefs sought by LSK because he had no doubt that they are appropriate and necessary for protection of the constitution administration of justice, enforcement of the rule of law and protection of public interest.

He ruled that LSK had clearly demonstrated in this case that the said acts of parliament are out necessity being illegally administered.