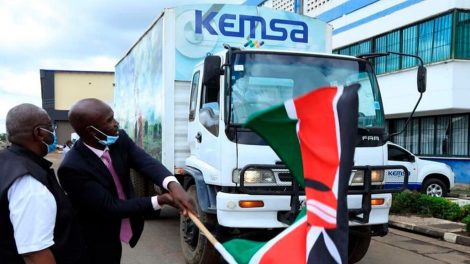 Sheria Mtaani Na Shadrack Wambui has filed a case urging the court to issue conservatory order stopping the appointment and assumption of Ramadhani to Kemsa.

Ramadhan took over office early this week as the new boss of the drugs agency to succeed the then acting CEO John Kabuchi.

The lobby claims Kemsa conducted a sham process in the recruitment of the new boss with great secrecy and failed to involve the public in disclosing the names of the applicants and the dates of the interviews.

Sheria Mtaani said a transparent process would have enabled members of the public participate and give views.

It also said it has reason to believe the recruitment process was tailor-made to select Ramadhani who served in Kemsa as its director and head of its Human Resource Committee.

“She only resigned a few days before the commencement of the recruitment process,” reads court papers.

Through lawyer Shadrack Wambui, the lobby said the recruitment process was opaque with no provision for public participation at any stage of the entire process.

“No lists of applicants were publicised or lists of shortlisted candidates or the public invited or given an opportunity to comment….” reads court documents.

The organisation further said it believes Ramadhani, as the head of Human Resource Committee, designed and developed the job description and job specification, thereby granting herself undue advantage in the entire process.

Wambui further alleged that from Kemsa’s press release, they have learnt that Ramadhani does not meet the minimum substantive educational requirements when examined under the Kenya Medical Supplies Act.

He alleges that in a move to defeat the ends of justice, Kemsa has taken active steps to ensure the new CEO assumes office before the advertised date of July 1, 2022.

“The petitioner is apprehensive that unless Ramadhani’s flawed appointment is not quashed, she will proceed to assume office thereby rendering the entire petition an academic exercise,” reads court papers.