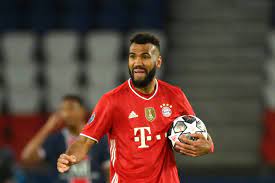 Bayern coach Julian Nagelsmann left stars like Leon Goretzka, Robert Lewandowski and Manuel Neuer behind for this trip to Bremen, but the visitors were rampant from the off even without those big-name players.

Choupo-Moting proved a more than capable deputy for Lewandowski on the night, and he smashed home the opening goal on the turn.

He turned provider for the second, playing his part in a one-two on the edge of the area for Jamal Musiala to make it 2-0.

Musiala was razor sharp all evening and his next effort was turned into his own net from close range by Bremer’s Jan Warm.

A defensive error than allowed Leroy Sane to square for Choupo-Moting, who made it 4-0 Bayern before half an hour was out.

The former Paris Saint-Germain and Schalke striker had his hat-trick before half-time and it was another simple finish, this time nodding in from a yard out after Thomas Müller’s header across goal was only partially blocked.

Bayern took off Müller, Joshua Kimmich and Niklas Süle at half-time, with one of the substitutes – Malik Tillman – pouncing on another Bremer mistake to make it 6-0 within seconds of the restart.

Within seconds of that goal, Bayern had a seventh – Musiala shifting his feet superbly on the edge of the area before thundering the ball into the top corner. Choupo-Moting struck the bar before Sane made it 8-0 with a fine angled finish, and then Bremer were given another brief reprieve when Lewandowski’s stand-in had a goal disallowed.

The home side had Ugo Mario Nobile red carded for pulling the jersey of Tillman soon afterwards though, and ruthless Bayern ran in four goals in the final 10 minutes.

Former France national under 20 midfielder Michael Cuisance slotted home after being teed up by fellow substitute Serge Gnabry, before Choupo-Moting added his fourth and Bayern’s tenth by sliding the ball into the corner from inside the area.

French full-back Bouna Sarr scored with a similar effort and then his compatriot Corentin Tolisso made it a deadly dozen for Bayern with another tap-in set up by Gnabry.