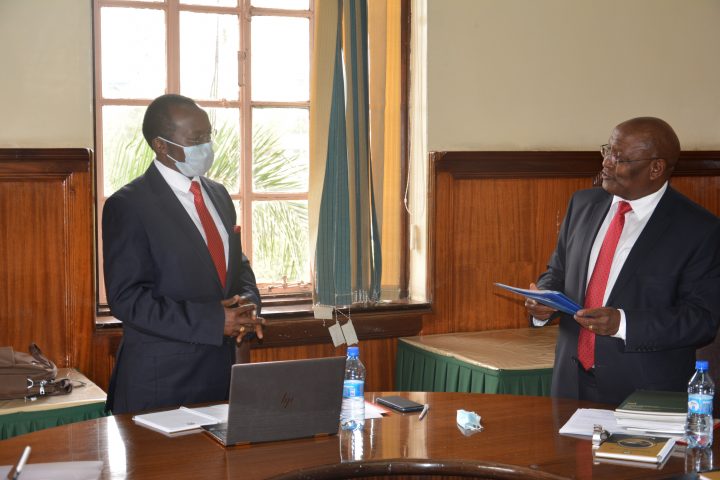 BBI Fate to be Known on August 20

The petitioners want the High Court’s previous ruling overturned,
paving the way for a referendum following a four-day hearing that
concluded on Friday, July 2nd, 2021.

The seven-judge bench which concluded a four-day hearing on Friday,
that witnessed lawyers from both sides mount spirited arguments, will
take 49 days to ready the ruling after declining a request to give an
early date.

The hearing was a legal showpiece, complete with arguments and
counter-arguments from the country’s top legal minds who took the
stand for their day in court.

Their case is based, among other things, on the argument that the
court erred in its decision because President Kenyatta was not the
Bill’s promoter.

Prof Githu Muigai, representing the Independent Electoral and
Boundaries Commission (IEBC),  had pleaded with the court to give an
early date citing strict election timelines amid concerns a referendum
would no longer be tenable.

The appellants contested a Constitutional Court decision declaring the
BBI constitutional review process sponsored by President Kenyatta and
Odinga as null and void.

President Kenyatta who was among the appellant in the case in his
final submission through lawyer Kimani Kiragu pleaded with the court
to invalidate the High Court ruling that shot down the BBI process.

“At what point in time should the High Court have determined whether
or not the President was acting within or outside the Constitution? In
my humble submission, this should have been done at the onset and not
the final judgement,” he stated.

Odinga through his lawyer James Orengo maintained that the BBI process
is a popular initiative and asked the Court to allow the will of the
people to reign.

“If the President can do these ordinary things including being a
voter, I don’t see why he cannot be a promoter (of BBI). But we are
not saying in this instance that he was the promoter,” Orengo said.

Paul Nyamodi, appearing for IEBC, noted that the Constitution can
indeed be amended and asked the Court to dismiss the submissions that
were made citing otherwise.
Prof. Githu Muigai termed the basic doctrinal as the challenge in
installing Constitutionalism in the country .

“I have been in these corridors for over 3 decades. I have never seen
a case like this. We don’t seem to agree on anything. Not what the
facts were, not what the law is, not what the concepts are, not what
the words mean, who the people are,” the former AG observed.

He faulted the argument by the Thirdway Alliance Party who stated that
the BBI proposals were an attempt to enact the constitution afresh.

“If you ever want to know a weak lawyer, they start with, “The spirit
of the constitution requires… why look at the spirit, while the
Constitution speaks for itself?” he said.
Arbiter Isaac Aluochier told the Appellate Judges that his displeasure
over what he termed President Uhuru Kenyatta’s contempt of court is
the main reason for suing the President over his role in the
Constitution amendment process.

He cited President Kenyatta’s speech during the Madaraka Day
celebrations in Kisumu, where Aluochier said the President used the
event to find the best way of attacking the Judiciary after stopping
the High Court declared BBI process illegal.

“I was enjoying my quiet life of farming in Rongo. But when you see
the country’s foundational law being mutilated, I had to come up and
defend the Constitution … we are not paid by anyone, we are just
Kenyans who love this country,” said the Arbiter
President Kenyatta ignited a war between the Executive and the
Judiciary when he said that the recent judgment overturned the
people’s will, diminished their power, and stifled efforts to fix ills
that have bedeviled the country.
Aluochier added: “We just wanted to drive on one point, appellant
Uhuru, as the President of this country, please obey the law. Stop
disregarding this Katiba of ours, especially when you are the number
one citizen of this country.”

“You took the oath to obey, respect, uphold, and defend this
Constitution of Kenya. And you are not doing it. Instead, you are the
one leading the process of amending and tearing apart this Katiba of
ours, and these are the things that annoy me as a Kenyan.”
In his submission, Senior Counsel Otiende Amollo argued that the court
erred in its decision, particularly because the Independent Electoral
and Boundaries Commission (IEBC) recognizes Mr. Dennis Waweru and MP
Junet Mohamed as Bill promoters.
“Against all controverted evidence, the promoters of this initiative
were Dennis Waweru and Junet Mohamed, the court insists on finding
President Kenyatta as the promoter. Anyone can support the
initiative,” Omollo said on Wednesday.

The respondents, including the Law Society of Kenya, Linda Katiba,
Third Way Alliance, Kenya Human Rights Commission, and Kituo cha
Sheria, argue that the Bill is flawed and that its creation was
unconstitutional, urging the appellate court to uphold the High
Court’s decision.

Senator Kindiki Kithure, representing three respondents on Thursday,
argued that the push for constitutional change was not a popular
initiative, as proponents claimed, but rather a presidential
initiative.

“The President has no right to initiate a popular initiative because
this avenue of the popular initiative is reserved for private citizens
including civil society, and is not available to State organs or State
officers,” Kithure said.