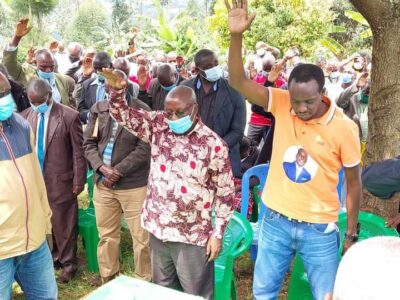 Simba Arati in Bobasi Kisii county over the weekend.

Race for Dagoretti North seat hots up even as word has it that Simba is going for Kisii governorshi.

Political drumbeats are on a crescendo in Dagoretti North constituency. This follows a revelation that the incumbent Mp Hon Simba Arati could be switching his political base to Kisii.

Kisii county is Paul Simba Arati’s home county. With invumbent governor Hon James Ongwae has done his two terms as governor. He is due to exit his seat which has attracted several aspirants among them Hon Simba Arati, his deputy Mr Maangi and Kisii senator Prof Sam Ongeri.

Recently,Simba Arati has intensified his charm offensive in the region. His forays have seen him engage in several activities ostensibly to endear himself to voters. This has set the stage open for all to try and grab the Dagoretti Nirth seat.

“Simba has been traversing Kisii county initiating several projects, he has been putting up houses for the old and vulnerable members of the society, this is a clear indication that he could be throwing his hut in the ring for the yet to be vacant governor’s seat” a member of his inner circle told us on condition we don’t disclose his identity.

Among those who are salivating for the Dagoretti North seat in 2022 is the immidiate former Nairobi county speaker and current CAS in the ministry of gender Hon Elachi Kadeveresia Beatrice.

Elachi is considered a front runner going by the spirited fight she put up in 2017. Elachi emerged second to Simbq Arati when she vied on the Jubilee ticket.

“Iam currently serving my country in a different capacity  but it is an open secret that Iam a resident if Dagoretti North, when the right time comes, I shall once again offer myself for election as Dagoretti North Mp” Elachi said.

However, Elachi remained tight lipped on her vehicle of choice.

“On which party am I going to run on, I will not venture into that discussion because we still have a job to do but we shall let our people know in due time” added Elachi.

Other than Elachi, others are Ben Shilibwa who is also expected to contest on Anc which is a party that sponsired him i. 2017.

Dagoretti North is considered an ODM stronghold but 2022 dynamics could present a totally different scenario.

Whether Simba Arati shifts his political base to Kisii county or not, Dagoretti North will be a battle ground if sorts.

Will it be Beatrice Elachi or will Shilibwa carry it?

According to pundits, Elachi who is fondly referred to as simply Mama Dago due to her well networked grassroots presence is having a headstart.

“We know the mistakes we made in 2017, we hqve since done a soul searching and now we are ready to roll” Mary Mudasia a campaigner for Elachi said.

Even before official campaigns start, excitement in Team Elachi’s camp is at its high.

Newer Post
300 families sleep in the cold after fire gutted down houses in Gatina area of Kawangware
Older Post
Jose Mourinho Marks his 1,000th Game as Coach with Victory