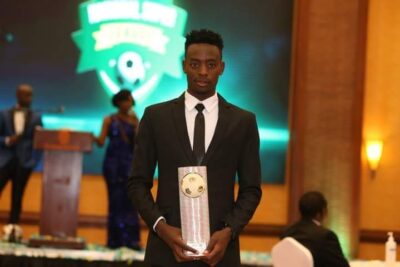 Vihiga Bullets defender Potipher Onyango heroics  in the 2020/2021 season earned him the most deserved award of the Most Valuable Player (MVP) during the National Super League awards that were held at Safari Park Hotel on September 15, 2021.

Onyango beat Talanta’s Antony Gicho and Mwatate United’s Cornelius Juma to take home one million shillings. The defender who has featured for Emerging Stars( U-23)  helped his side to earn automatic qualification to the Kenya Premier League after finishing second behind Talanta.

Onyango pocketed a total of Ksh1.3 million where he bagged Ksh1 million for being feted as the Most Valuable Player and Sh300,000 for winning the Best Defender award.

Mwatate United’s Cornelius Juma scored 16 goals to earn the Golden Boot award and Ksh400,000 ahead of Kenya Police’s Samuel Ndung’u and Jackson Okech of Vihiga Bullets who tied in second spot after netting 15 goals each to be gifted with Sh200,000 each.

Talanta’s coach Ken Kenyatta took home the coach of the Year award after successfully earning the club a promotion in his first season at the club beating Betika Super League runners up Vihiga Bullets coach Edward Manoah who won the FKF Cup as Chemelil Sugar tactician.

Talanta went home with the team of the year award while Kibera Black Stars which missed narrowly to qualify for the Premier League was feted with Team Fair Play award beating Vihiga Bullets and Fortune Sacco to the accolade.

Young Player of the Year: Alfred Tanui (Kisumu All Stars)