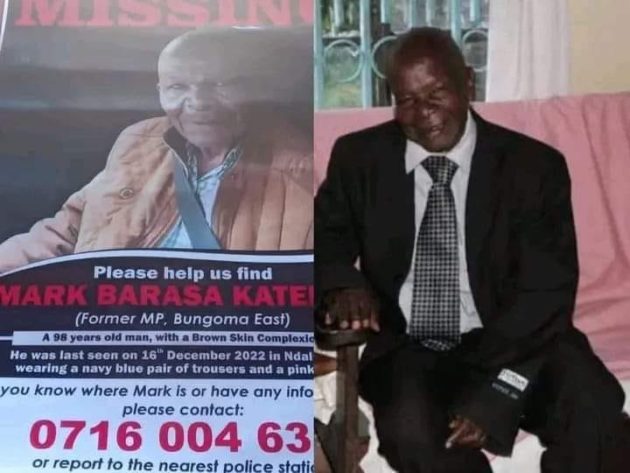 The body of the former Bungoma East constituency Mp was found dumped outside his home in Tongaren, Bungoma.

The 98- year-old was the first Bungoma East MP who served between 1963 and 1969. The constituency before it was split covered the current Kimilili, Tongaren, Webuye East and Webuye West constituencies .

Neither the date nor time of the death could be immediately established, police said.

Police said the body of the deceased was partially burned with acid and had the eyes, tongue, and left hand missing due to decomposition.

According to police, it was the lawmaker’s son-in-law Stephen Nyongesa who first discovered his father-in-law’s body that was in a thicket.

The politician had been reported missing on December 16, 2022, after he failed to show up at either of his two homes in Ndalu and in Chesamisi.

The police proceeded to the scene and established that the body had extensively decomposed. Bungoma head of DCI Joseph Ondoro said they are investigating a possible murder.

“The body was about 20 meters from his house. We wonder how they failed to feel the smell,” he said.

A relative said the deceased was in good physical health when he went missing from his Ndalu home.

The body was moved to Kiminini Cottage Hospital Mortuary for preservation pending an autopsy.