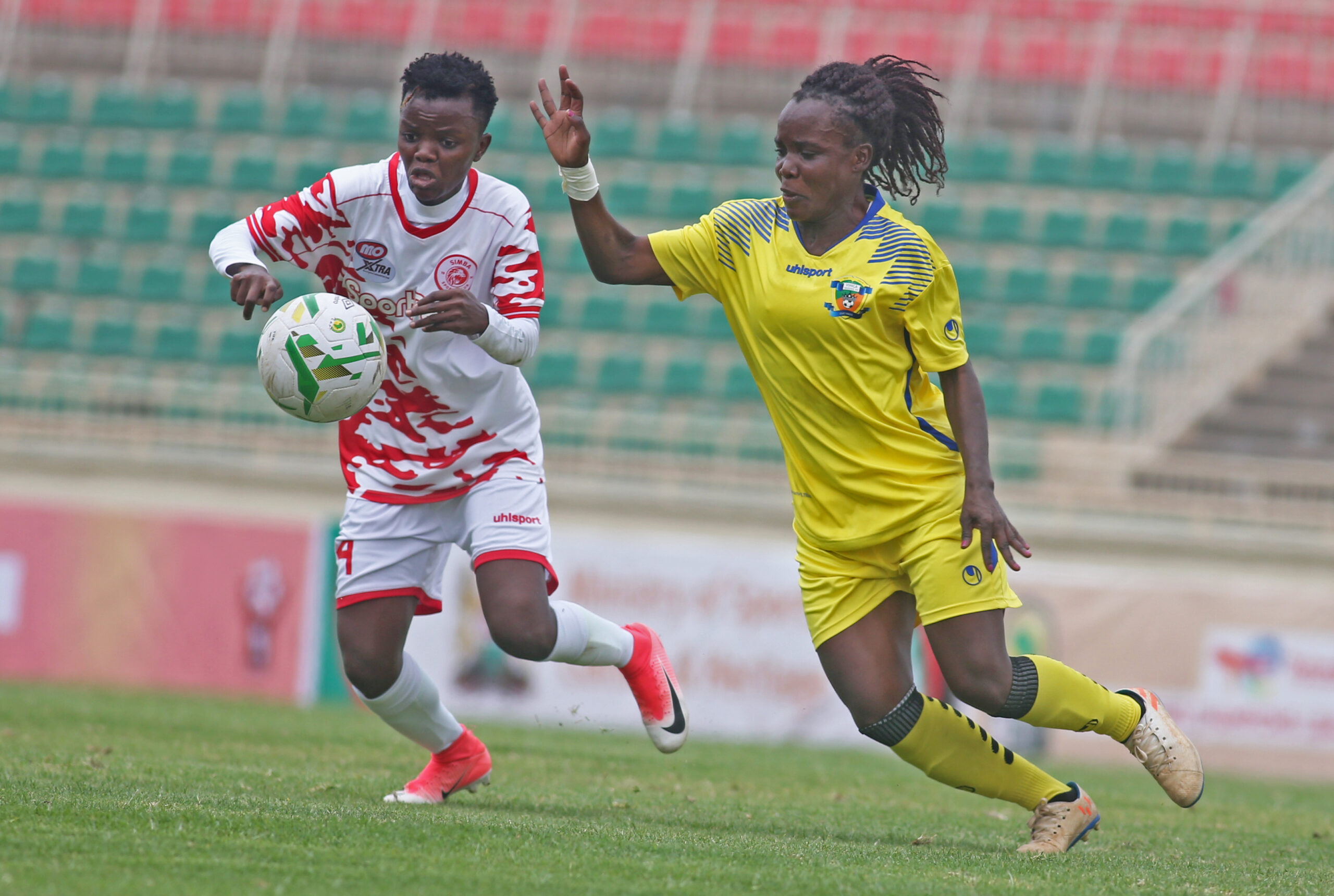 Vihiga queens of Kenya beat Simba queens of Tanzania 1-2 to advance to the finals of the CAF WCL CECAFA qualifiers. The clash staged at Nyayo national stadium was the first of the two semis lined up in the same venue.

Enroute to the semi’s,Simba had finished top of her group winning all her group matches. Vihiga on the other hand had recovered from her group opener loss to CBE of Ethiopia to thump Yei stars of South Sudan and Zanzibar’s New generation 11-1 and 8-0 respectively.

It was the home girls who started the match on a high and as early as the second minute they should have atleast a shot to trouble Zubeda Mgunda in goal.

Teresa Engesha had received the ball on the right flank made a run towards Fatuma Suleimani, inside the the Simba box, turned her inside out but her goal bound shot was blocked and took steam off the shot for goal Mgunda’s easy collection.

Come the sixth minute and Jentrix Shikangwa had a chance to make a dangerous freekick just outside the area after the marauding Engesha was brought down. Her however tame effort didn’t trouble Zubeda in Simba’s goal.

Simba asserted themselves more into the match and by midway the half they were the better side doing most of the attacking with Asha Djafari being such a pain for vihiga’s backline from the right wing.

However for their attacking, Simba had nothing meaningful coming out of it. In the 45th minute vihiga queens almost went a goal up against the run of play when Joan Nabirye saw her low drive skid agonizingly wide off the right upright.

The teams went into the half time break deadlocked at 0-0. Come the second half and vihiga queens were on it, hungrier for a goal. They would however have to wait until the 64th minute when Maurine Achieng rose high you head home from a captain Enez Mudeizi’s delivery.

Leading by a lone goal. Vihiga seemed to have changed tact and decided to defend their goal. A tactic that backfired minutes later as this invited Simba queens to throw all they got at them and in the 70th minute substitute Aisha Mnnuka fired Simba back level from a goal close range after vihigas backline had been caught napping by Djafari’s cut back.

Deadlocked at 1-1, the game seemed destined for penalties but Jentrix Shikangwa had other ideas as in the 87th minute she rose highest to meet Alice Mudeiri’s well weighted freekick delivery to thump the ball home for vihiga’s second.

This would prove to be the match winner for the KWPL champions who will now either meet their group opener tormentors, CBE of Ethiopia or lady doves of Uganda who were slated to clash later on on the same venue, with the losers set to face a wounded Simba queens in the third place playoffs on Thursday.