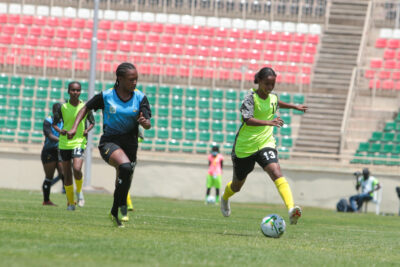 The first round of the CAF Women Champions League CECAFA qualifier matches ended on Sunday , August 29, at Nyayo Stadium in both groups with interesting insights in record as teams prepare for the second round fixtures.

We look at the interesting insights of the tournament so far from the goals, interesting players to look for in the upcoming matches and chances of teams as teams gear up for the lone ticket for the continental showpiece set for Egypt later this year.

Commercial Bank of Ethiopia’s Medina Busser showed a masterclass performance in their match against Kenya’s champions Vihiga Queens as she registered a record first hat trick of the tournament in their 4-2 win. Busser who joined the Bankers recently from Defence FC was in a World of her own displaying a great performance in her maiden match for the side.

Busser connection with her team captain Loza Abera was amazing as the later proving three assists and a goal and the former offering one assist and the goals. Going to the second round matches, its evident that Busser is in a good position to contend for the golden boot award by the end of the tournament.

Uganda’s Lay Doves sensation Fazila Ikwaput has two goals and considering that she is not fully fit because she is still recovering from a nagging injury, it will be interesting to see how she plays in the second match. Vihiga Queens’ Maurine Achieng also scored a brace against the Ethiopians.

Lady Doves keeper and captain Daisy Nakaziro hasn’t conceded a goal in the first round matches.

Top of the Group

After the first round, the Ugandan champions Lady Doves are top of the table standing with three points and Tanzania’s champions Simba Queens are second with three points but the former have a great goal difference. PVP and FAD have not managed a point yet.

In group B, Commercial Bank of Ethiopia is top of the table standing with three points with Yei Joint Stars on second with three points but the former has a great goal difference.Vihiga Queens and New Generations haven’t registered a point in the first round fixture.