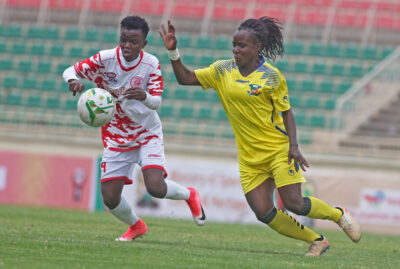 Vihiga Queens are through to the finals of the Caf Women’s Champions League CECAFA Qualifiers folowing their hard fought 2-1 win over Simba Queens on September 6th at Nyayo National Stadium.

Mercy Achieng opened the scores after the hour mark but Vihiga Queens joy was short-lived as Simba equalized seven minutes later thanks to the substitute Aisha Mnuka’s strike. Jentrix Shikangwa added a second goal fr the home girls with only two minutes on the clock to make sure her side earn the finals slot.

As expected, this was going to be a very interesting fixture with both teams seeking the ticket to the finals but it was Bihiga who had the last laugh.

Vihiga Queens assistant coach Boniface Nyamunyamu was elated by the win saying that they will still work on the mistakes from today’s match to make sure their last match becomes easy.

“I’m confident enough the cup will remain in Kenya. We are trying to work on the mistakes from this match against Simba. I’m happy because the girls have done 6- to 70% from the instructions given,’ he said.

Vihiga has progressively improved in the tournament with Nyamunyamu adding that his charges have  great endurance as the match progresses.

His Counterpart, Hababuu Ali said his side has had exposure throughout the qualifiers adding that it was good because there are still in the competition.

“We need quality players by the end of this. We have played well since we started the qualifiers and its good that we are still in the tournament,” he added.

Simba will play against the winner of the second semi final game pitting Commercial Bank of Ethiopia and Lady Doves of Uganda.