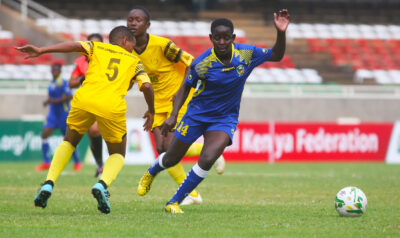 The home girls finished second in group B on six points while Simba Queens finished top of their group with seven points ahead of the Ugandans who also have seven points with the former having a better goal difference.

This will be an exciting fixture that has been scheduled from 1pm ahead of another interesting encounter pitting Commercial Bank of Ethiopia (CBE) and Lady Doves of Uganda that will kick off at 4pm at the same venue.

Vihiga Queens will be led by Jentrix Shikangwa who is fresh from scoring a brace in their empathic 8-0 win over New Generation of Zanzibar on Friday. Shikangwa is expected to partner with Teresa Engesha and Maureen Achieng who have scored three and six goals respectively since the qualifiers kicked off. Violet Wanyonyi will be expected to boost the striking force having scored four goals so far.

The match pitting CBE and Lady Doves will a cracker with the Ethiopians seeking to extend their unbeaten run in the qualifiers. The lethal duo of Medina Awol and team captain Loza Abera will be tasked to hunt goals for the Bankers. The chemistry between the two is one to be admired considering the fact that they have contributed to most goals scored and assists. Abera has scored a record twelve goals from three matches from the 21 goals that CBE has scored in the tournament so far.

These are the best four clubs in the region and they are expected to put their best performance as they seek the final spot. The winner from the qualifiers will represent the region in the continental showpiece set for Egypt later in the year.