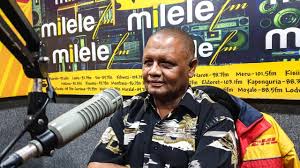 His family confirmed that Muhsin, aged 67, died at a Mombasa Hotel on Friday, October 8th, 2021 afternoon at around 4.00 pm.

A relative who spoke to Kenyaonlinenews.com  indictated that Muhsin had just finished his Friday prayers, took lunch and returned to his hotel room, where he then complained of feeling unwell.

“He called a friend to say he was unwell. When the friend asked if he could take him [Badi] to the hospital, he declined saying he would be okay,” Nassor told Kenyaonlinenews.com  via telephone.

Shortly after, his friend returned to the room to find Badi fast asleep. It was later established that he had died.

Muhsin is famed for his Kiswahili show on Kenya Broadcasting Corporation (KBC) ‘Dira ya Dunia.’

His mastery of the Swahili language earned him thousands of fans both locally and globally.

Until his death, Muhsin was one of Kenya’s longest serving Kiswahili news anchors, having worked for over 30 years.

He had recently been recalled from retirement by KBC to co-host another show.

Tributes poured on social media after news of his demise.

admin January 23, 2022
The Azimio la Umoja power line up for Nairobi County can now be revealed as alignments and realignments begin to take shape in the Raila Odinga led mo [...]
Politics