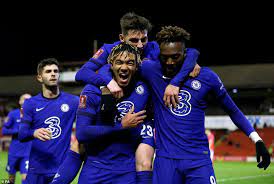 Chelsea Get Past Aston Villa to March on in Carabao Cup

Reece James scored the winning penalty in a shootout as Chelsea beat Aston Villa to reach the last 16 of the Carabao Cup on Wednesday, September 22nd, 2021.

The full-back fired home the Blues’ final penalty to win the shootout 4-3.

In the shootout, Ashley Young struck the crossbar with Villa’s second penalty before Kepa Arrizabalaga saved their third from Marvelous Nakamba to hand the advantage to the home side.

Ben Chilwell then struck the bar to take it to the final set of penalties, but James made no mistake to seal the Blues’ progress.

A goal from young Villa forward Cameron Archer had ensured a draw in normal time, levelling with a header after Timo Werner had put the Blues ahead.

Chelsea will host Southampton in the last 16 of a competition they last won in 2014-15.

Wednesday’s result extends the reigning European champions’ unbeaten start to the season, which has also seen them top the Premier League with 13 points from five matches.