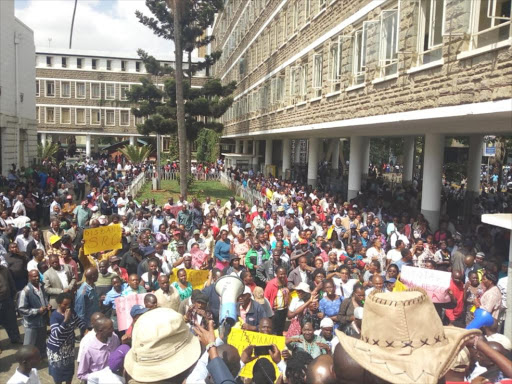 City Hall Workers to Down Tools on Wednesday

Nairobi City County workers have threatened to go on strike on Wednesday, October 13th, 2021 over the failure to implement the 2013 Collective Bargaining Agreement (CBA).

The union’s Nairobi branch secretary, Benson Olianga, said the more than 12,496 workers have been without a medical cover since July.
This, Mr Olianga said, goes against the Employment Act 2007 and the registered 2013 CBA.

In May, insurance firm AAR suspended medical cover for more than 12,000 workers following failure by the Ann Kananu-led county government to clear an outstanding premium of Sh259.9 million.

“Due to non-compliance and willful failure on your part to address these grievances, the union hereby Invokes Section 18 of the Employment Act 2007 to parade members of City Hall beginning Wednesday, October 13, at 8am,” read the strike notice.

Olianga also noted the failure to pay overtime and uniform allowances, and other dues for retiring employees, failure to provide personal protective equipment and uniforms for deserving staff as well as lack of harmonised staff benefits.

“The above matter was agreed upon following a joint branch executive committee (BEC) meeting of the Kenya County Government Workers Union Nairobi staff branch and Nairobi city branch held on September 28, where the BEC unanimously agreed to hold a parade on the stated grounds,” added Olianga.

The workers have vowed to paralyse services from Wednesday next week if City Hall fails to address their grievances.