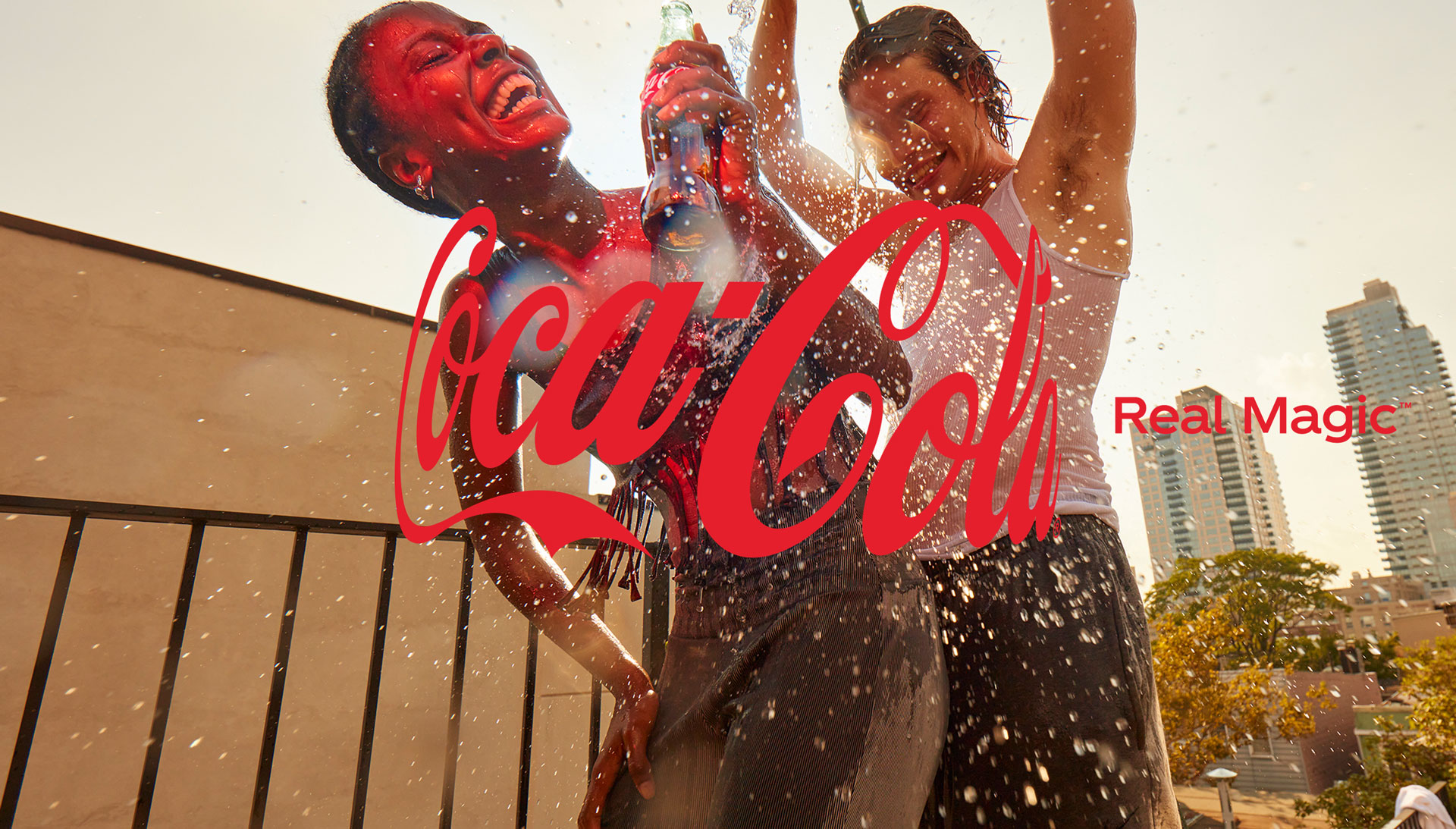 Coca-Cola has unveiled a new global brand philosophy and platform called Real Magic, which invites everyone to celebrate the real magic of humanity.

The platform refreshes the brand’s trademark promise – to unite and uplift people every day – with renewed relevance for the world we live in today.

Real Magic marks the first new global brand platform for Coca-Cola since 2016 and is being launched alongside a refreshed visual identity for Coca-Cola, as well as a new perspective on the Coca-Cola logo that will feature across Coca-Cola marketing.

Inspired by its representation on Coca-Cola’s iconic packaging, the “Hug” logo lifts the curved Coca-Cola trademark on bottle and can labels to provide a visual signature that will embrace and frame moments of magic across Coca-Cola’s communications.

The platform is built from lessons of the last 18 months: that we can find magic all around us when we come together in unexpected moments that elevate the everyday into the extraordinary.

It also acknowledges the many contradictions experienced as new generations find harmony and human connection in a virtual and divided world.

To activate the campaign in Kenya, consumers will be taken through an exciting journey which will include a virtual reveal of the campaign, instore activations, fantastic offers for our customers.

This will lead us into the big Iconic festive season which will culminate in the best festive ever celebration that will include a colorful Christmas caravan in select locations across the country.

The film, which launched digitally on September 27th, asks what if Coca-Cola, as a symbol of togetherness, could bridge universes meant to be apart to create Real Magic. The film also features three well-known gamers – DJ Alan Walker, Team Liquid’s Aerial Powers and Average Jonas.

Coca-Cola partnered with advertising agency BETC Worldwide to create the “One Coke Away From Each Other” campaign, as well as leading film director Daniel Wolfe and gaming and CGI specialist production partner Mathematic.

The campaign also features social and digital executions, as well as out of home. In select markets, Coca-Cola is running a code hunt beginning Oct. 11 where people can win prizes, including gameplay sessions with celebrity gamers.

There are 25 codes hidden within the film. Through collaboration with the Brand Partnership Studio at Twitch, the interactive livestreaming service, gaming creators on Twitch will unlock another 10 codes with their viewers, during livestreams on their Twitch channels. As a part of the campaign, Coca-Cola will award prizes to consumers who find and enter the hidden codes on a Coca-Cola micro-site, in participating countries.

Winners have the chance to receive their share of one of the largest ever prize pools of Bits, a virtual good used to show support for Twitch streamers, as a part of the sweepstakes administered by Coca-Cola.

“We look forward to launching the Real Magic platform here in Kenya and across the other markets in the East and Central Africa franchise as we share and celebrate the Real Magic™ moments in our everyday lives.  We will celebrate the diverse lives of Coca-Cola drinkers around the world like never before, with the aim of uniting and uplifting people,” said Isabelle Kariuki-Rostom, Frontline Marketing Director, Coca-Cola East and Central Africa Franchise.

“Coca-Cola is a brand defined by dichotomies: humble but iconic, authentic yet secret, real yet magical,” said Manolo Arroyo, Chief Marketing Officer for The Coca-Cola Company.  “The Real Magic philosophy is rooted in the belief that dichotomies can make the world a more interesting place – a world of extraordinary people, unexpected opportunities and wonderful moments. At the same time, it captures the essence of Coca-Cola itself: a real taste that is indescribable, unique, a touch of real magic.”

Coca-Cola is collaborating with artists, photographers, and illustrators to bring the concept of Real Magic to life through the embrace of the Hug logo. Through their own distinct and unfiltered lenses, they will bring moments of everyday magic to life in ways that are inclusive and collective, yet also individual and expressive.  Design partners include Wieden+Kennedy London, KnownUnknown and Kenyon Weston.

“Real Magic is not simply a tagline or a one-off campaign: It is a long-term brand philosophy and belief that will drive and guide marketing and communications across the Coca-Cola Trademark,” Arroyo said.

“Through the Real Magic platform, we ultimately want to engage people very differently through an ecosystem of unique and ownable experiences,” Arroyo said. “’One Coke Away From Each Other’ has been built for, and with, a community that demands something different than what they may have come to expect from Coca-Cola. In developing this campaign, we’ve partnered with the best creators, with gamers, with Twitch and with others to find our place in a reality unlike any we’ve known before. That’s tremendously exciting.”