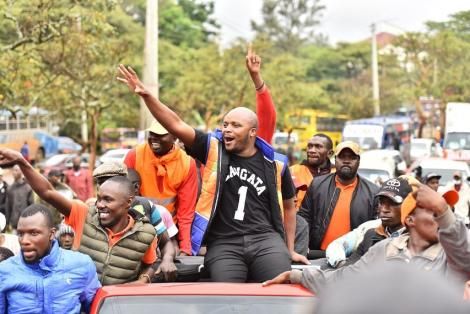 . Hosting his last breakfast show on Radio Africa’s radio station Kiss 100, on February 9th, Jalas, as he is popularly known, revealed that he is officially embarking on his campaign trail.

Bidding his radio fans goodbye, Jalas took the opportunity to express gratitude to his employer and was thankful for the time he spent at Radio Africa’s Kiss 100. According to him, he feels that the time is right for him to shift gears regarding his career.

“The curtain call falls on me today, I begin a new chapter to go and try my hand in politics. I feel it’s the right time after being told for many years that young people your time is coming, but we are not young anymore,” he said, adding, “It’s a dream that I’m going for, to try and be a different kind of leader and show my people that good leaders still exist.”

Admitting that it was emotional to say goodbye, Jalas added that the journey ahead of him is not easy and that he needs to give it his full focus hence the resignation.

“Today marks the end of this amazing journey and I’m trying to begin a new one. I’m trying to give this new one full focus. Even if I wanted to stay here and the rules did not demand that I resign, the journey I’m going on is not as easy as anybody would think,” he said.

Barely three weeks ago, Jalang’o had hinted that he will quit the media industry to fully focus on campaigns.

“We are about to hang up the boots and take a new challenge. But we can’t just drop the mic… I need to pass it to the next Jalang’o,” read part of his message.

“I am going to be the next MP for Langata. Youth change your votes. Come and vote for us to build a new Langata. I am campaigning for myself. I am very serious; I am the next MP of Langata. Mark this day!” he said a while back.