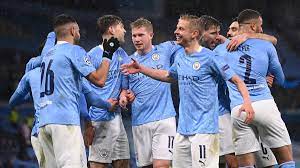 City manager Pep Guardiola was absent from the dugout at a packed County Ground, as he and 20 of his players and staff were isolating after testing positive for the virus.

Despite seven first-team players being among those who could not travel, the Premier League leaders named a strong team and were merciless against a side 72 places below them in the English football pyramid.

Bernardo Silva met a low cross from 19-year-old England national youth team player Cole Palmer to put last year’s beaten semi-finalists ahead early on, with Gabriel Jesus making it two after the Robins gifted the visitors possession on the edge of the area.

Ilkay Gundogan beat Lewis Ward with a free-kick from 25 yards to make it 3-0, but the Swindon goalkeeper did well to save a Jesus penalty minutes later after Silva was fouled by Jordan Lyden inside the box.

Harry McKirdy pulled a goal back for the hosts late on, only for Palmer to complete the scoring for City with a brilliant finish from a tight angle.