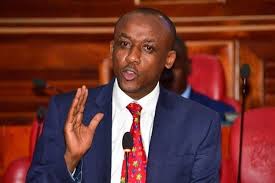 In a heated senate seating on Monday, November 1st 2021, it was clear that senators were not taking the current mess in the sports ministry and industry as a whole lightly.

Giving the matter the weight of seriousness it deserves. One senator Mr. Mutula Kilonzo junior making his submissions with a raft of demands in a request form to the cabinet Secretary, most which were figures clarifications on amounts sent or spent on various sporting activities in the country,directly to the federations or spent on behalf of the federations.

Notably the senator requested for a detailed payment and disbursement schedule of sh 433M which the ministry says to have wired to fkf for the national teams, whose books interestingly only indicate a receipt of sh 355M between 2019 and 2021.

The senator also sought to know if the cabinet secretary was aware that the team she put up for the inspection of the Football Kenya Federation was largely composed of officials from the Criminal Investigation Department (CID) and the National Intelligence Service (NIS).

On the same he sought to know why FKF being a statutory body was not informed before hand on the intended inspection and the reasons for such as is required by law.

Senator Mutula, has also sought information if the Cs knew that the inspection team purported to conduct an inspection for two days which presupposed a determined outcome prior to the inspection.

Concluding his submission before the speaker of the Senate, Mr. Kilonzo stated of Cs Amina’s intention to disband fkf, which would be very detrimental and would greatly reverse the gains made in the football circle in Kenya, as this would qualify Kenya for an outright FIFA ban.

Weighing on the issue , senator kipchumba murkomen stated of an existence of a problem in the sports ministry, and lack of towards to sports sector and sportsmen and women.

The Senate team football club captain sought to know how much money has been allocated to sports in the country, and how much of the allocation was actually being used for sports given that some of the funds allocated for sports was being redirected to the Universal health care fund.