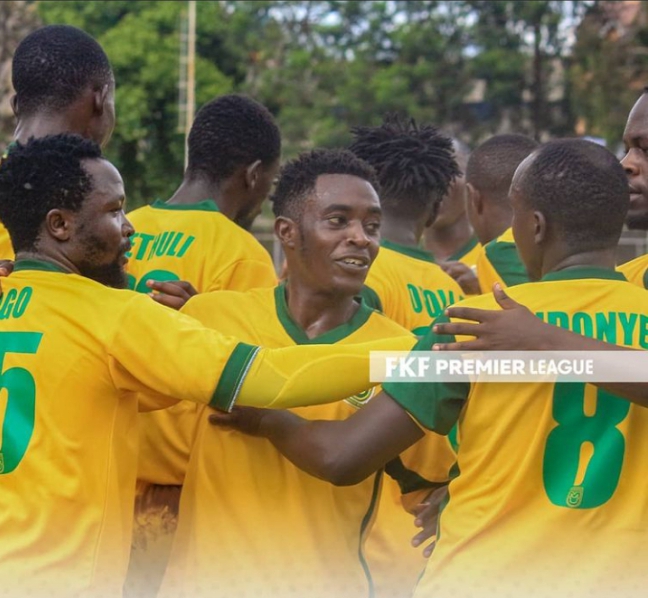 Danson kago, the “Shujaa” as Mathare United down Sofapaka FC in Thika

Veteran attacking midfielder, Danson Kago scored a first half double to put his side on course for a 2-1 victory over their hosts, sofapaka.

Sofapaka still being dogged by the same demons which saw them name just a 13man squad for the previous contest away to Nzoia sugar. It was the same story against the slum boys as only goal keeper L.Masaka and youngster Bernard Muiruri were named in the Batoto ba Mungu’s bench.

Mathare united were the better side in the opening minutes of the contest. And for their efforts they would go ahead in the 13th minute.Danson Kago tapping home from close range after a quickly started corner from the left.

A couple of minutes later the former posta Rangers attacker was at it again scoring Mathare’s second in almost a similar fashion to his first goal. A corner from the left, started short, then a shot is delivered from the left wing, an unmarked Kago finds himself at the right place at the best of times to redirect the shot into the net, sending Kevin Omondi the wrong way.

Going two goals down in quick succession, Sofapaka upped their game and they almost pulled one back in the 28th minute when a lose ball in the area fell beautifully in th path of Francis King’atua, but his curled effort went inches over the bar.

In the 34th minute King’atua was again on a goal search. This time from a free kick from 40yards out. The distance never seeming to trabel the “lefty”, his ferocious effort stinging job Ochieng’s gloves for a corner.

Mathare would do well to soak sofapaka’s pressure late on in the opening half, to take their healthy two goal cushion to the break .

The second half was more of a flipped roles with sofapaka doing most of the attacking but with no notable problems for the mathare united custodian.

In the 68th minutes Danson Kago would quickly turn from hero to villain as he gifted sofapaka the easiest of penalties. Having rushed to go down on a sliding tackle on Joe Waithera, the ball somehow found the way to his hand.

A handball awarded, a penalty given,a yellow card for Kago for his troubles.
Joe Waithera maintaining his cool from the spot to calmly send Job Ochieng the wrong way.

With the deficit halved, sofapaka tried all they could to salvage a point from this but their shallow squad really cost them this one.

Tired legs but coach ken Odhiambo had no one to turn to on his bench. With the only available options being a goal keeper, L Masaka and youngster Bernard Muiruri who besides Sofa’s heavily depleted squad the past couple of matches haven’t been able to earn Odhiambo’s trust to make a debut yet for the club since he signed for them last season.

In the end the slum boys would despite the nervy finish, win the match thanks to Kago’s first half double. Sofapaka have now lost one, won one and drawn one in their first three matches of the campaign. They next host last seasons runners up KCB.

The win was Mathare’s first having lost the first two encounters to Bandari FC and Ulinzi stars. The slum boys next travel to Sudi stadium to take on Nzoia sugar over the weekend