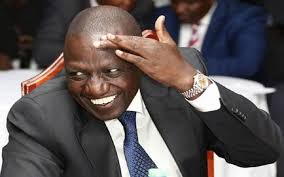 In a letter addressed to the DP, the prosecutor wants Ruto to shed light based on his public utterances on the matter.

“This letter is to notify you that I have listed you as a prosecution witness in the above quoted matter, which is ongoing in court,” said Hajj.

The prosecutor said that his office has consolidated the two cases in which nine accused persons are charged with conspiring to defraud the government of more than Ksh 63 billion in the Arror and Kimwarer dam projects.

“It is against this background that I am inviting you to appear in court and shed some light in the matter based on your past public remarks,” read the letter in part.

The DPP added:”It is on public record on the 28th February, 2019, you refuted claims that Ksh 21 billion had been lost in the multi-purpose dam projects in Elgeyo-Marakwet, and instead indicated that only Ksh 7 billion. You also indicated that the government had a bank guarantee to secure the payments made to contractors. Your insights, therefore, on this matter will be vital  in prosecuting the case and recovering lost public funds.”

Hajj said his office will be notifying Ruto as to the exact date he will will be required to appear in court in person and testify on the matter.

“We look forward to collaborating on this and to recovery of misappropriated public funds,” the DPP quipped.

Neglect to perform official duties, abuse of office, failure to comply with lawful requirements made by an environment inspector and engaging in a project without prior planning have also been indicated on the charge sheet.

Jointly with others not before court, they conspired to unlawfully procure the services of CMC di Ravenna-ITINERA JV for the development of Arror and Kimwarer multi-purpose dams project under a purported EPC which scheme was designed to defraud the government of Kenya of USD 501,829,769.

The embattled Kimosop is facing a similar case where he is charged together with former National Treasury CS Henry Rotich in relation to the Kimwarer and Arror multi-billion-shilling corruption case.

The two cases have stalled since July 2019 after the state was unable to arrest the directors of Italian firm CMC di Ravenna which was awarded the contract worth over KSh 54.7 billion for the construction of the two dam’s projects in Kimwarer and Arror, Elgeyo Marakwet.

According to the court proceedings, the court heard that the government of Kenya is yet to hand over 18 Italians who are on the run and are supposed to face charges in the matter to enable the matter to proceed for trial.

The 18 include directors of Italian construction company CMC di Ravenna, who have been separately charged from Rotich and Kimosop.