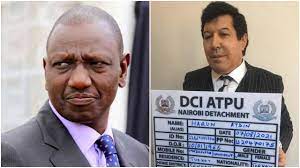 Aydin was who was expected to accompany Ruto to his aborted Uganda trip reportedly left the country aboard a Turkish Airlines flight between Sunday and Monday morning.

Aydin’s lawyer Ahmednasir Abdullahi and his team who were at Kahawa law courts ahead of Aydin’s case confirmed to the media that indeed he had left the country.

According to Ahmednasir, they were ready to undergo a criminal process as the Turkish businessman was expected to be arraigned in court on Monday, only for them to be informed that he had already been kicked out of the country.

Other lawyers who were to represent Aydin were Cohen Amanya and Hillary Sigei, who said he boarded Turkish Airlines and was expected to land in Turkey shortly.

Aydin was arrested on Saturday upon returning from Kampala and after a stay in custody over the weekend was expected at Kahawa Law Courts in Kiambu to answer to terrorism charges.

Since his arrest on Saturday, Aydin was being held at the Nairobi Area anti-terrorism police unit (ATPU).

He said the investor was a victim of top-down arrogance bred by patronage and cartels that criminalise enterprise.

Aydin was on the same flight as DP Ruto to Kampala but the authorities barred the DP from travelling.