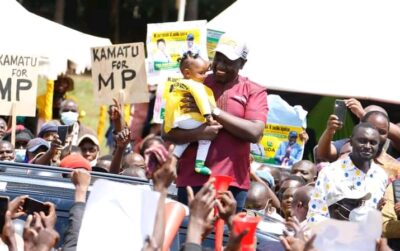 Speaking after commissioning the Nyahururu Primary School Multipurpose Hall on Saturday, Ruto said whereas the rich have a right to meet and discuss how to protect their wealth, those in the low income social stratum also have the right to hold meetings to discuss ways of empowering themselves.

“Those of you out to contempt who think you can decide for the people of Kenyan in hotels by interviewing the people you want to sponsor, we want to tell you that we are waiting for you on the ground,” DP Ruto added, in what he  seemed to refer to the Mt. Kenya Tycoons who hosted Odinga and the OKA leaders, under the auspices of the Mt Kenya Foundation.

The DP who was  drumming up support in the race to succed President Uhuru Kenyatta, further slammed his competitors over their recent attempts to make political in-roads in the vote-rich Mount Kenya region.

During the tour, DP Ruto donated KSh1.5 million to 500 small business in the region and promised to allocate Ksh 120 million per constituency every year should he be elected president in the upcoming 2022 General Election.