DP Ruto hit out at his competitors, ask them to stop rallying behind uhuru’s endorsement. 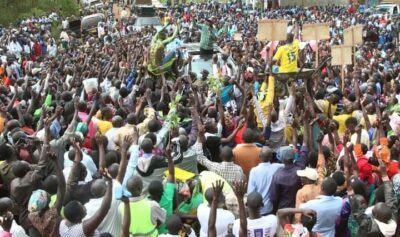 Deputy President William Ruto has asked his competitors in the race to succeed President Uhuru Kenyatta ahead of the August 2022 general elections to directly face him in their quest for the country’s top seat.

Ruto who was in Bungoma county to popularise his bottom up economic model said the Opposition was setting themselves up for failure in the 2022 general election, asking them to man up and face him instead of pushing the President to endorse them.

He further warned them against hiding behind President Uhuru Kenyatta but rather face him in the upcoming general elections.

Ruto asked Kenyans to rally behind the hustler movement that is advocating for an economic model that will address the needs of ordinary citizens.

He said the opposition had failed to come up with an agenda that will compete with the bottom-up economic model.

“I want you to support me because of my policies and development agenda. I do not want you to fall for useless slogans that will not benefit you,” he said.

In what appeared like a jab targeted at Uhuru and Raila, Ruto asked his detractors to stop using deceitful political tactics aimed at tarnishing his reputation and instead sell their agenda to the people.

The leaders rallied Western to support the DP saying he was the only leader who will address economic problems facing the region.