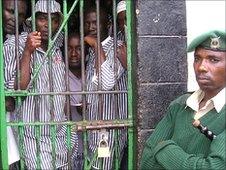 Police said the incident happened at 10 pm after one of the remandees tricked the officer, Amos Muteti, into a trap set by his accomplices.

The escapees had been ferried from the Industrial Area Remand Prison in Nairobi and were awaiting arraignment for robbery with violence.

“Officers have been mobilised and are combining the surrounding areas to re-arrest them,” the police report said.

Police Constable Amos Muteti has also been taken into custody to assist with investigations.

According to a police report filed under OB Number 115/11/5/2022, one of the remandee called Muteti and requested if he could escort him to the toilet.

“Muteti alleges that when he opened the door, he was attacked by nine remandees,” says the police report.

The cop says he was punched and kicked by the suspects.

“The suspects then forcibly took away the keys of the main door, opened and escaped before jumping over the police station fence,” said the report.

admin December 6, 2022
The leader of the Majority in the National Assembly Kimani Ichungwah has been told to keep the children of Azimio leaders out of politics. Nairobi [...]
© 2021 Kenya Online News. All rights reserved. Powered by Play360 Solutions LLC