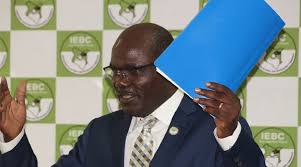 The IEBC boss  Wafula Chebukati on Monday, December 13th, 2021, said 82 out of the initial 89 parties which had made submissions in November, made new submissions and met the threshold.

He said the 10 parties which have not met the threshold will be given the way forward.

“The Commission will contact the 10 Political Parties that did not comply with the nomination rules to advise on the way forward,” Chebukati said.

Chebukati made the announcement on Monday during a consultative forum with the Political Parties Liaison Committee (PPLC) on 2022 General Election preparedness, nomination rules, and proposed electoral legal reforms.

Last month, PPLC criticised Chebukati for failing to involve them in critical decisions that the commission is making ahead of the 2022 general elections.

The parties had accused Chebukati of being reluctant in engaging them as a way of preparing for a credible and fair election.

“We are sending our message to our chairman Wafula Chebukati not to poison the political environment by issuing statements before consulting with the stakeholders because it will unfortunate to get an apology from them and yet they had put us on the newspapers that we have not complied to the regulations,” PPLC Chairperson Evans Misati said.

IEBC chairperson had said that the parties had 14 days to make amendments.

“Pursuant to the provisions of Section 27 (2A) of the Elections Act, 2011 and Regulation 6 of the Elections (Party Primaries and Party Lists) Regulations, 2017, the Commission has reviewed the submitted Political Party Nomination Rules,” Chebukati said last month.