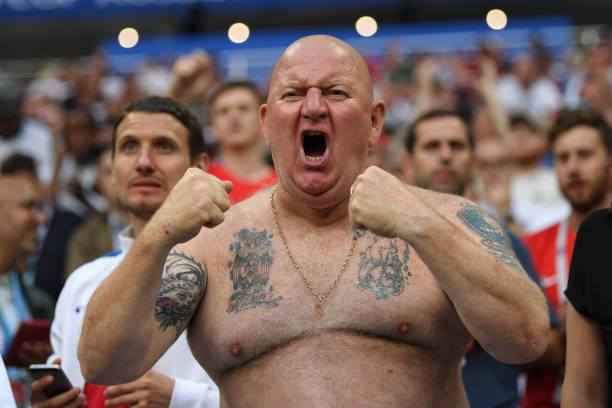 England maintained their 100 per cent record in pursuit of a place at next year’s World Cup in Qatar with a 4-0 victory away to Hungary in a hostile atmosphere in Budapest on September 2nd, 2021.

The Three Lions made it four wins from four qualifying games to open up a five-point lead over Poland, who England face in Warsaw after Sunday’s meeting with Andorra at Wembley, at the top of Group I.

The match was marred with several flashpoints in the crowd, including loud jeering when England’s players took the knee before kick-off, objects being thrown and racist chanting, they came through a mediocre first half to take total control after the break and run out easy winners.

Raheem Sterling crowned a smooth move for the opening goal involving Declan Rice, Jack Grealish and Mason Mount to slide home his 16th goal in his past 24 international appearance after 55 minutes.

Harry Maguire adding a third as his header from Luke Shaw’s corner slipped through the grasp of Hungary keeper Peter Gulacsi.

In one of many incidents, Shaw was showered with plastic cups before taking the corner, as were England’s celebrating players after Maguire scored.

Sterling suffered a similar fate after putting England ahead when he took off his shirt to display a message in tribute to a close friend who died a few days ago.

England’s night was rounded off three minutes from time when Gulacsi’s second serious error gifted them a fourth as he allowed Rice’s routing shot under his body.

England now face Andorra at home on Sunday, September 5th, 2021, before travelling to Poland for what is likely to be the toughest game on the road to Qatar in Warsaw next Wednesday

Kenneth Wephukulu September 25, 2021
Parallel celebrations of this year’s Mashujaa Day in counties across the country have been stopped. In a statement issued on Friday,September 24th, [...]

Kenneth Wephukulu September 24, 2021
Pressure on FC Barcelona boss Ronald Koeman continued to mount after his side were held to a goalless draw at lowly Cadiz at Estadio Nuevo Mirandilla [...]
© 2021 Kenya Online News. All rights reserved. Powered by Play360 Solutions LLC