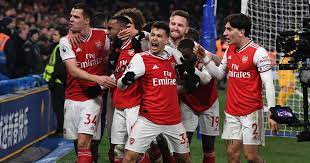 Arsenal moved into the top four for the first time in this English Premier League (EPL) season with a 2-0 win over 10-man West Ham on Wednesday, December 15, 2021.

Gabriel Martinelli scored the opener early in the second half before substitute Emile Smith Rowe confirmed victory for the Gunners late on.

Arsenal captain Alexandre Lacazette also had a penalty saved by goalkeeper Lukasz Fabianski in the second half.

West Ham’s Vladimir Coufal was sent off for a second booking in conceding the penalty as he was judged to have fouled Lacazette in the box.

The result continues Arsenal’s fine home form – they’ve won eight of their last nine in all competitions at the Emirates, and have the joint-best home record in the Premier League – and moves them into the Champions League spots for the first time this season.

They replaced West Ham in the top four, with the Hammers winning just one of their last six in the Premier League.