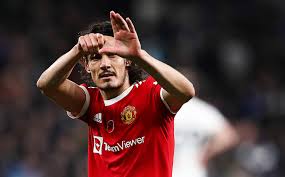 With Manchester United trailing 1-0, Cavani came off the bench to score a second-half equalizer for a1-1 draw to ensure coach Ralf Rangnick did not suffer a first loss as the Devils interim boss.

Allan Saint-Maximin’s fine first-half goal had given Newcastle the lead in the seventh minute as Ralf Rangnick’s side struggled.

“I can’t praise the players enough,” Newcastle boss Eddie Howe told BBC Sport. “It was an excellent performance. I’m really pleased. We deserved to win and you’re left with the horrible feeling of not getting what you deserve.

“We are capable of beating anybody. We proved that today. I thought we all performed today.

“That’s got the be the standard we’ve set ourselves. We can be a force to be reckoned with.”

The point is scant reward for the Magpies and leaves them 19th on 11 points, two from safety but having played more games than all their rivals – and four more than Burnley in 18th.

Man of the match: Joelinton