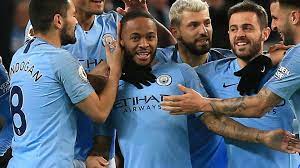 England’s Raheem Sterling, Spain’s Rodri and Portuguese international Bernardo Silva were all on target as Manchester City routed Everton at the Etihad Stadium in Manchester,

City warmed up for Wednesday’s Group A Champions League contest against Paris St-Germain with their third consecutive win in all competitions.

City dominated the opening 45 minutes at the Etihad Stadium, Bernardo being denied one-on-one and Ilkay Gundogan heading on to the bar after 27 minutes.

Sterling eventually broke the deadlock a minute before the interval, latching onto Joao Cancelo’s exquisite outside-of-the boot pass to fire past Jordan Pickford on the half-volley on his 300th Premier League appearance.

Rodri doubled their lead 10 minutes after the break with a wonderful strike, driving the ball powerfully into the top-left corner from 25 yards out.

Pickford denied Sterling his second before Bernardo wrapped up the victory with a close-range finish.