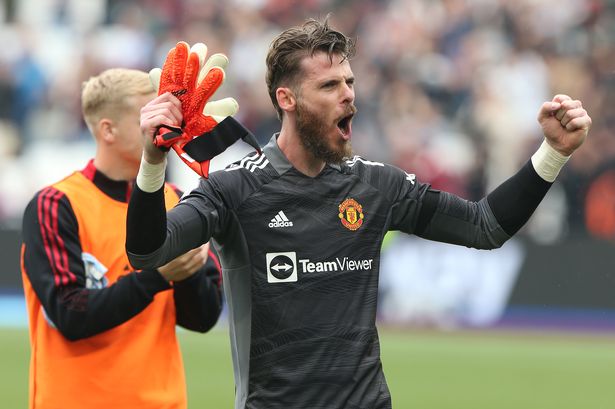 Manchester United goalkeeper David De Gea saved a late penalty as the Red Devils came from behind to beat West Ham 2-1 on Sunday afternoon to extend their unbeaten start in the Premier League.

West Ham opened the scoring in the first half through a deflected Said Benrahma effort, but United swiftly responded when Cristiano Ronaldo poked home to score his fourth goal in three games since his sensational deadline day return from Juventus.

As the game progressed, the tempo dropped and it looked like the points would be shared at the London Stadium.

That was until substitute Jesse Lingard who spent a successful loan spell at West Ham last season, appeared on the left side with two minutes to play before cutting in and expertly finding the top right corner with a brilliant finish.

Deep into stoppage time, further drama followed as Luke Shaw was adjudged to have handballed in the box and De Gea dived the right way to push away the spot-kick that had been taken by Noble, who was making his first touch after coming off the bench in the 95th minute.

Mark Noble then stepped up to take the penalty, despite having just entered the field and without kicking the ball and David de Gea became United’s hero when saving from the spot.

Victory ensures Ole Gunnar Solskjaer’s side remain unbeaten in the league this term with four wins and a draw, while West Ham suffered their first loss of the campaign.