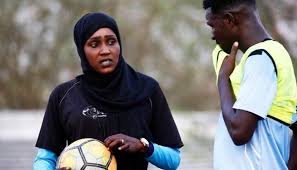 Fifa to Mediate over FKF and Sports Ministry War

The world governing football body is ready to mediate the impasse between Football Kenya Federation (FKF) and the Ministry of Sports.

In a letter by the Fifa Secretary General Fatma Samoura (Pictured above) to Kenya’s Sports Cabinet Secretary Dr Amina Mohammed dated November 14th, 2021, said Fifa and the Confederation of African Football (CAF) are ready to mediate between FKF and the Ministry of Sports in normalising the situation.

The Secretary General said FIFA and CAF administrators are prepared to work closely with FKF and the Ministry of Sports officials for the good of Kenyan football development.

“I am receptive to the need of a common discussion through a videoconference call that we may organize without further ado. My collaborators will contact your office accordingly to settle the logistical details as soon as possible,” said Samoura.

However, Fifa has called for the reinstatement of the disbanded Football Kenya (FKF) as they the world body pursues dialogue and an amicable solution to the situation.

“Going forward, without prejudice to the allegations that have been raised and any potential trial for offences that may have been committed, FIFA and CAF are asking you to consider the reinstatement of the FKF executive committee prior thereto,” read the letter.

Samoura further stressed that the disbandment is contrary to Fifa principles where its member associations including FKF are supposed to run their own affairs independently without undue influence.

The official echoed the same sentiments aired earlier by the FIFA Associations Chief Officer Kenny Jean-Marie on the risk of Kenya facing a possible suspension by the world governing football body if the Caretaker Committee continues running Kenya’s football affairs at the expense of FKF.