Juve were coming from a 3-0 defeat they suffered last weekend in the hands of MacMillan in their second leg opener at the same Grounds.Nadya Fahmy and Anita Kuruna scored to ensure that their side pick the maximum points from the encounter.

Commenting after the match, coach Denis Ayekha said his charges showed much confidence from their defeat to MacMillan adding that they are seeking to collect ten points from the possible twelve from the remaining four matches.

“I’m happy with the squad mood and confidence levels. They are growing considerably. The team was great today, two two shots on target and two goals in the first half. The players had an outstanding attitude and reactions from the last match and I can’t find the ideal player of the match since I had winners in today’s match,” said Ayekha.

The tactician remained confident that his charges will work on the mistakes from this encounter as they prepare for their next game set for the weekend.

“Consequently, we will work on how to win our remaining matches are are a bit tricky . It’s a learning curve for all of but we will pick up momentum to the next match. I’m hoping that we pick ten points from the possible twelve from the remaining matches,” he added. 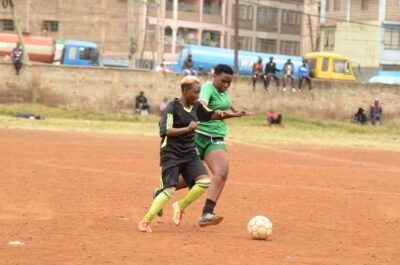 Juve has remained with four matches, against Ligi Ndogo, Beijing Raiders, Uweza and Lexus before the season concludes.The side is currently third on the log with 14 points having won four matches, drawn two and lost two. Uweza are top of the table standing with 21 points while Beijing Raiders have collected 17 points and in the second place.

The side injected new blood to the squad before the second leg kick off with Mercy Nyamazi, Zawadi Kadzo and Hearther Mutindi ,Ivy Jebet, Veronica Nason, Amina Hassan who all join from hidden Talent.