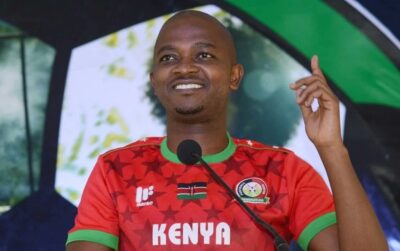 FKF president Nick Mwendwa was set free after the case against him was dropped by the magistrate wandia Nyamu earlier today November 25,2021.

“Football Federation Kenya wishes to inform FKF members and the general public that the court has today closed the case against Nick Mwendwa following the failure by the state to provide charges against him,” said FKF.

Nyamu dismissed the case after prosecutors who had applied for a 7 day to enable them to conduct investigations failed to provide evidence against Mwendwa.

“I therefore order this matter closed,”Nyamu said, she also ordered that Mwendwa be refunded his 4 million bail payment.

FKF president was arrested on 12th November 2021, where he was forced to spend a weekend behind bars although he was released on a 4 million bail as investigation is carried out.

Mwendwa was charged with abuse of office and misappropriation of funds at the helm of the country’s football governing body.

CS Amina had directed the formation of a committee to take charge of the football affairs for a period of six months.

The FKF president is grateful for the due process and will continue to work towards ensuring that football in Kenya returns to normalcy.

It now remains a mystery as to who will be the official caretaker of the football affairs in the nation.