Ever since the Harambee Stars loss to Mali, there has been an outpouring of disappointment and even anger which is fine but we cannot dwell in that particular space for too long or we will lose more than just three points.

I have been watching and reading reactions, some even in the newspapers and they honestly make me sad. I have seen people say that football in Kenya is dead or in the ICU or things to that effect and I ask myself: what football are we talking about?

What about the Harambee Starlets? Have you seen their results? 15-1 against South Sudan and going strong!

The National Team is the representation of our footballing hope as a country but it is not football in Kenya. I can understand fans having that view but I have seen a legion of former players, administrators and even media commentators suggest the same thing and I think as stakeholders in the game –those who know better, should speak better.
I have even someone asking for a FIFA ban so that Kenyan football can put its house in order and I think that is a naïve and dangerous view because the person making that claim is operating from a very narrow view of football.

The National Teams are the tip of the spear but they are not the game in the country. There is an entire edifice of football underneath the national teams that should not be summarily dismissed based on the performance of the national team.

I am not suggesting that the performance of the national team is not important, it is but so too are the thousands of players, coaches and other stakeholders in the game. I am, for instance writing this piece from Kilifi County at a place called Moving the Goalposts –a girls only football academy that uses football to empower young women in the society. I am here in my capacity as a coaching Instructor running a course with 26 female coaches. This is football and whether people want to admit it or not-this is the work FKF is doing quietly and consistently. 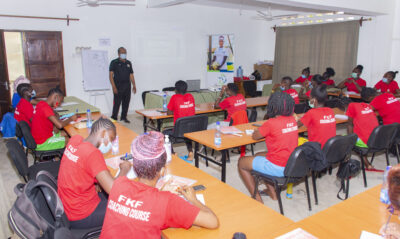 I have been to almost every county in the country including places like Garissa, Marsabit and Samburu where they love football as much as anywhere else and they are eager to learn and play.

Since Nick Mwendwa came into office we have seen more than 4,000 coaches trained across the country and for me this alone can create a generational change in the quality of Kenyan football.

There are hundreds of thousands of players who want to play the game but they are not enough coaches to help them convert that talent into quality and until we sort that out-we cannot change football in Kenya.

I have spent decades in football I have not seen this kind of effort before, I have not seen this kind of dedication to doing football properly. The coach is a pillar of the game, across the country there are thousands of people calling themselves coaches but all they have is the passion and desire to be a part of the game, add knowledge to that passion and we can begin to ensure that players especially young ones are being nurtured properly and receiving a technical education.

I think it is very easy to sit behind a keyboard and throw words and accusations especially without having a complete picture. Mob justice is easy, but we should give Kenyan football the benefit of a fair hearing.

There are thousands of football clubs in this country most playing in county and regional leagues, dreaming of making it to the National Super League, and the Premier League-that is football.

Women’s football was dead in this country, it has been revived, and risen so quickly that Vihiga Queens a Kenyan team will be the first regional representative in the CAF Women’s Champions League. That is football.

Lastly there is the question of a ban, do we even understand what that means? It means no Kenyan player can move from one club to another across the world, it means no Kenyan team can participate in CAF or FIFA competitions so Gor Mahia, Tusker, and Vihiga Queens are all automatically eliminated from competitions they have earned the right to play in and win.

I hate losing but let’s keep our heads. Football is bigger than the Harambee Stars and its bigger even than Nick Mwendwa and whether you like him or not.

The writer is a former Harambee Stars Coach and a FIFA certified Coaching instructor.