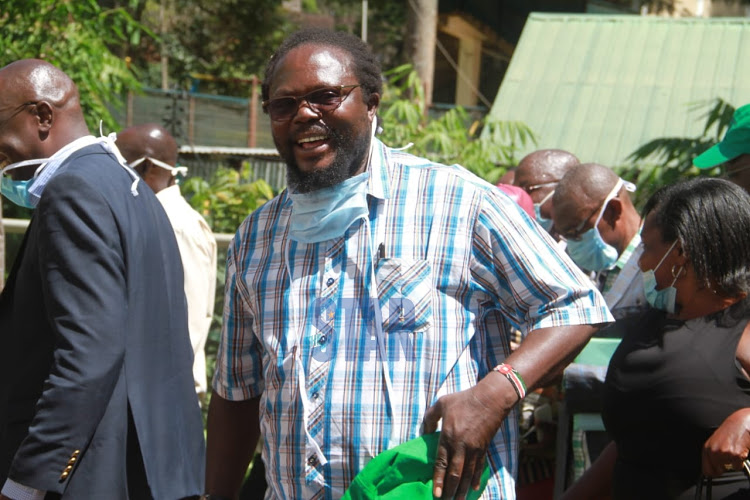 Kanduyi Member of Parliament (MP) Wafula Wamunyinyi the party leader of a faction of Ford Kenya has stepped down and joined the Democratic Party of Kenya (DAP-K).

Wamunyinyi led a group of Ford Kenya defectors to form and the launch the Democratic Party of Kenya (DAP-K) and was named as its party leader.

The formation of the Democratic Party of Kenya (DAP-K) now brings to an end infighting in Ford-Kenya which had rocked the party for the past two years.

On December 2nd, 2021, Simiyu and his Kanduyi counterpart Wamunyinyi officially exited the Forum for Restoration of Democracy – Kenya (Ford-K).

They then hinted on unveiling a new party on December 14 that they will use to defend their seats next year.

Speaking during the launch, Wamunyinyi said they decided to move on after their quest to ‘reform’ Ford-Kenya was thwarted by Moses Wetang’ula and his team.

“DAP-K will field candidates in all positions except that of the presidency. Nominations in the party will be free and fair and no one will have to grease the hands of anyone to get a nomination certificate,” Wamunyinyi said.

Wamunyinyi said continued wrangling in the Ford-K party was not healthy as the country heads to next year’s polls.

The two have been fighting to take control of the party from Bungoma Senator Moses Wetang’ula.

Wetang’ula recently published a list of party officials in the local dailies as he sought to take firm control of the political outfit.

Kitutu Chache MP Richard Onyoka’s name has been struck off from the party list of Ford-Kenya in the latest Kenya gazette notice.

Onyonka, who has since decamped to Raila’s ODM party, has been replaced as the deputy party leader by Millicent Anyango Abudho.

Also struck off is Tongaren MP Eseli Simiyu, who until his dismissal was serving as the outfit’s Secretary General. Simiyu’s position will be taken over by Kiminini MP Chris Wamalwa.

The purge also saw Kanduyi MP Wafula Wamunyiyi, who recently led a revolt that sought to dislodge Wetangula as the party leader, lose his position as Secretary of Agriculture, Livestock and Fisheries to Kwanza MP Ferdinand Wanyonyi.

Kisumu Town West MP Olago Aluoch is also among notable names that have been replaced.

The move came after the National Delegates Conference (NDC) at the Bomas of Kenya, Nairo endorsed the senator as the party’s presidential flag bearer for the 2022 polls.