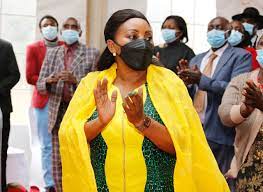 Karimi takes the battle to Dawood who has twice floored her father Muriuki twice in a row for the seat.

Karimi, while highlighting the failures of the eight-year rule by Dawood compared to his father’s performance said she was devastated by poor development and neglect by the current MP.

Karimi promised to change the fortunes of the residents and accused Dawood of neglecting the villagers despite voting for him in 2013 and 2017.

She said she is ready to help the clans develop the land they bought by building a petrol station, a resort, or any other moneymaking investment.

“Your children need education. Why can’t we pool resources together and bring an entrepreneur to this region? It was a fantastic idea to buy land near the road, make good use of it,” Karimi said.